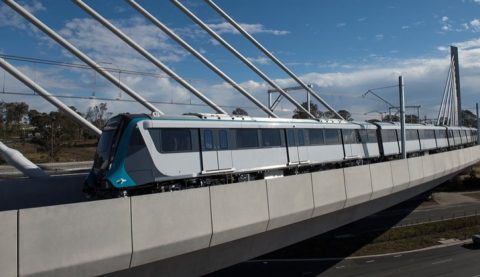 Sydney’s new autonomous metro train has passed a historic test on Tuesday, as it crossed a new cable-stayed railway bridge in the Australian city. No passengers were onboard during the test. Sydney is Australia’s first city to implement a fully-automated metro system.

44 kilometres of overhead wiring has been installed on the Sydney Metro Northwest project, out of a total of about 78 kilometres. The 22 driverless single-deck trains are expected to carry their first passengers on the North West Metro line. The system will operate Alstom’s computer-based train control system (CBTC), Urbalis 400.

Nine out of 22 trains have been delivered from Alstom. The trains include three double-doors per side in each car for improved access and passenger flows, large windows and ambient LED lighting. The trains will include constant CCTV monitoring, emergency intercoms and the latest way-finding aids for customer information and real-time travel information.

The autonomous trains are part of the Sydney Metro Northwest project, which is Stage 1 of Sydney Metro, Australia’s biggest public transport project. The project is expected to cost around 8,3 billion Australian dollars.

Another milestone for driverless transportation was reached last week. Rio Tinto made its first iron ore delivery by autonomous train on July 10. The self-driving freight train travelled over 280 kilometres from Rio Tinto’s mining operations to port. Rio Tinto expects to start operations by the end of 2018.