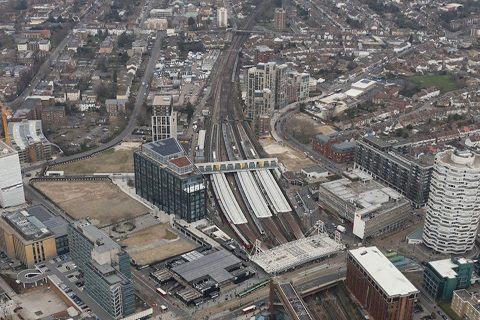 Published on 17-01-2023 at 07:00
Aerial shot of East Croydon station and the city aroundNetwork Rail

Cellnex UK and Three UK, two mobile data companies, have teamed up to provide business-minded commuters with end to end connectivity. The popular Brighton Mainline route, favoured by hard-working commuters, will soon have the sort of business communications the workaholics heading for the City have been craving for years. The partnership will see Three host its mobile voice and data equipment on new Cellnex UK infrastructure along the entire London to Brighton railway route.

Three UK is the first of the UK’s four mobile network operators (MNO) to sign an agreement to join the service. The work is part of Cellnex UK’s delivery on a 25-year contract with the UK infrastructure agency Network Rail to provide enhanced connectivity for passengers and communities along the route.

Signal varies from strong to gone

Three customers can expect to experience noticeable improvements to their mobile and data connectivity from later this year, with an uninterrupted connectivity experience along the Brighton line, both onboard the trains and at major stations, including Clapham Junction, Croydon, London Bridge and London Victoria. As a neutral host, Cellnex UK’s infrastructure can host equipment from all four MNOs, meaning there is potential for all mobile and smart device users to benefit from enhanced connectivity throughout their journey.

The Brighton Mainline service runs 51 miles (82 km) from London to the South Coast, through some of the UK’s most densely populated areas. At its busiest, Brighton Mainline and its branch lines carry 50,000 passengers every day. Currently, mobile internet and connectivity between London and Brighton varies from a strong signal to no connectivity at all because of the topography and the many tunnels and cuttings along the route.

The route is particularly well frequented by business commuters, so the incentive to make their journey into more productive time has been high. “The lack of reliable connectivity along complete rail journeys is a frustration shared by many passengers and is something that Network Rail is keen to address”, said David Crawford, Managing Director, Cellnex UK. “As a neutral host and via shared investments, Cellnex provides value to both mobile operators and Network Rail. Therefore this agreement with Three UK is a hugely positive step in improving customer experience along the Brighton Mainline route.”

“The Brighton Mainline project supports the UK Government’s Digital Strategy”, explained Crawford. Network Rail have said the Instalation is part of their ‘putting passengers first’ vision. They also hope it support environmental efficiency and encourage people to swap cars for trains. “It’s great to see plans for the rollout of 5G connectivity across the route between London and the south coast”, said Lucy McAuliffe, currently acting as Network Rail Sussex route director. “This will make a real difference to passenger journeys and people living alongside the railway as it will allow them to stay better connected. Passengers will be able to shop, work and talk whilst travelling and even have seamless connection when travelling through tunnels.”

On the down side, there will be no escape from the boss anymore, anywhere on the route. The next Brighton Belle will not be an express to London, it will be the office ringing your mobile to ask where you are.