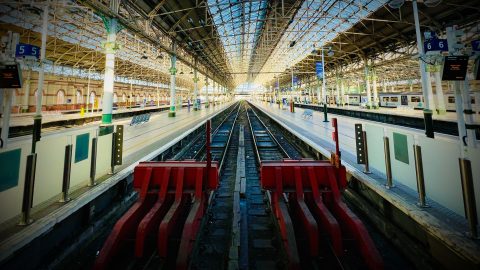 Mark Harper, the new transport secretary in the UK government, has said that to break the deadlock with the unions, and solve the long-running industrial dispute, it will require an acceptance of revised working practices. He spoke to British national media on Sunday, having met face to face with the leader of the biggest union involved, the RMT, on Thursday of last week. Hopes of an early resolution seem to be fading once again.

The Department for Transport, which has been widely accused of stalling negotiations between train operators and the unions, has taken a proactive role in the past week, culminating in a high profile round of media briefings from Mark Harper, the appointed transport secretary, just over three weeks into the top job at Horseferry Road. Having met with Mick Lynch of the RMT union, it is cards on the table for both sides and time to call bluffs in the seemingly endless round of rail strikes in the UK.

Speaking with the BBC on their popular Sunday morning news broadcast, Mark Harper told the presenter that the railway industry would require reforms to its working practices in order to make possible the sort of efficiencies that would release train operators to make improved pay offers. ”It is the reforms that free up the savings that then unlock the ability for the companies to make an offer to the trade unions on pay”, he said. “Both of those things have to happen in parallel.”

This will not come as news to either side of the dispute. For example, Network Rail, the national infrastructure agency, has often expressed frustration that geographical and professional demarkation lines mean it is forced to deploy more staff than necessary to infrastructure issues. The unions, particularly the RMT whose 40,000 members are most involved in Network Rail operations, say that the current arrangements are necessary for safety reasons.

While major dispute; over pay, conditions and security of employment; has grabbed the headlines across the UK, there have been areas of the industry that have stood on the sidelines, or at worst been collateral casualties – not to mention rail clients and customers. While RMT members at fourteen passenger train operators have walked out in England, disrupting cross-border services in Wales and Scotland, staff on domestic services in those parts of the UK have been reporting for work. However, since Network Rail signallers have been called out across Great Britain, there has been significant disruption there too. Freight operators have suffered in silence, losing about forty per cent of their workings during strike days. Northern Ireland has been unaffected, although there is no rail freight operation there.

Other trades unions remain involved in a variety of disputes around the country. Notably however, some smaller but still significant disputes have been resolved, including a settlement reached in Scotland, where the devolved government in Edinburgh has direct management of the rail network The transport secretary has however taken a firm stance. “I do not have a bottomless pit of taxpayers’ money to throw at this problem”, he told viewers on Sunday morning. Whatever was said on Thursday, and Sunday, does not appear to have softened the stance of the unions. The RMT has already renewed its legal mandate for Industrail action, and strikes have been announced for four 48-hour periods on 13-14 and 16-17 December, and 3-4 and 6-7 January. That’s three very big cards on the table, for starters.