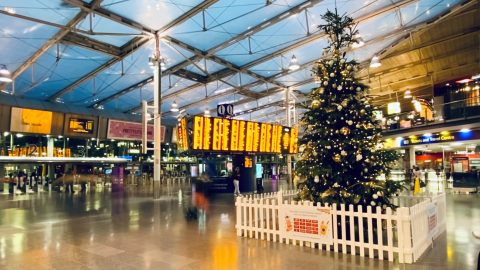 UK strikes to run up to Christmas and after New Year

Britain is braced for a series of damaging rail strikes, disrupting the run up to Christmas and the return to work in the new year. The largest trades union in the rail industry, the RMT (Rail Maritime and Transport) will stage a series of walkouts, each lasting forty-eight hours, during December and January. In a major escalation of the long-running dispute over pay, conditions and job security.

After initial optimism, a round of talks held over the past several weeks have failed to bring about an equitable resolution. RMT, which recently renewed its mandate for action with a well supported ballot, has called out its 40,000 members at the infrastructure management agency Network Rail, and at fourteen passenger train operating companies, for strike action on 13-14, 16-17 December and on 3-4 and 6-7 January.

The mood music coming out of the talks to resolve the longest running dispute on the British railway network is decidedly downbeat. The two sides in the dispute seem less likely than ever to sing from the same hymn sheet. The season of good cheer it is not set to be. As well as a series of forty-eight hour strikes in December and January, the RMT has imposed an overtime ban across the railways from 18 December until 2 January, meaning RMT be taking industrial action for 4 weeks.

The ban on overtime will make it difficult for operators to maintain a full timetable of services. Much of the weekend schedule, particularly Sunday services, relies on staff working overtime and rest days. Fulfilling scheduled commitments is already an issue in the industry for a variety of other reasons, including illness and unfilled staff vacancies.

Outline of a credible deal

The RMT claims that their negotiators made every effort, but failed to reach agreement. “It is clear that that the government is directly interfering with our attempts to reach a settlement”, reads their statement. “The union suspended previous strike action in good faith to allow for intensive negotiations to resolve the dispute.”

From the other side of the table, the Rail Delivery Group, the industry body that represents passenger and freight operators, says they had made progress over the last two weeks of talks. “For the first time in months we can see the outline of a credible deal”, said a spokesperson.

“Further strikes, especially in the run up to Christmas, will disrupt the first normal festive season our passengers have been able to look forward to since the Covid pandemic, taking even more money out of the pockets of railway staff, and will cause huge damage to the hospitality and retail sectors dependent on this time of the year for their businesses. We owe it to them to stay round the table.”

Network Rail is criticised by the RMT, who claim they have failed to make an improved offer on jobs, pay and conditions for union members during the last two weeks of talks.“ At the same time Rail Delivery Group, representing the train operating companies, have also broken a promise to make a meaningful offer on pay and conditions and even cancelled negotiations that were due to take place [on Monday]”, said the union.

Union boss Mick Lynch intends to take the matter directly to the UK government. His union claims to have evidence from all fourteen of the train companies denying that Rail Delivery Group has the authority to conduct negotiations on their behalf. “It is impossible to find a negotiated settlement when the dead hand of government is presiding over these talks. This whole process has become a farce that only the new Secretary of State [Mark Harper] can resolve. When I meet him later this week, I will deliver that message.”

In a separate dispute, the drivers’ union Aslef is calling out its members this coming Saturday, 26 November. Their dispute is over a matter of pay and affects twelve TOCs. As for the mood music, Chris Rea was right. We will all be driving home for Christmas.