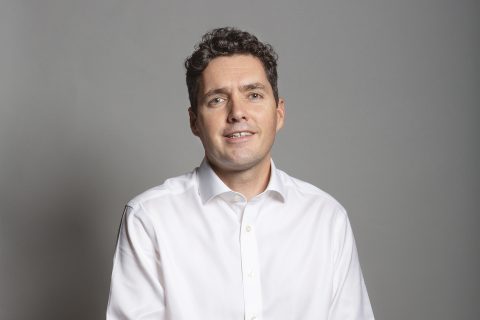 The young face of Huw Merriman is an old face around the transport portfolio. Now, the political Peter Pan is the new Minister of State for Rail & HS2. He takes on what is generally regarded as among the most senior of the junior ministerial posts in the government. Add to that the combination of responsibility for the railway and the high speed project HS2, and he has his work cut out.

Aged forty-nine but looking a decade younger, Huw Merriman may catch up on few grey hairs. The magnitude of his appointment to the newly amalgamated position of Minister of State for Rail & HS2 will soon sink in. He may be the member of parliament for the constituency of Bexhill and Battle in the very south east corner of England, but Merriman takes on a portfolio that will see him visit every corner of Great Britain. He could also find himself in the right place at the right time, as a breakthrough in the long-running and hugely damaging series of railway industrial disputes show a glimmer of hope for resolution.

He may appear to be among the youngest ever ministerial appointments, but Merriman has more years of experience behind him than is apparent. He also has plenty of pedigree in the rail sector. Merriman steps over from competently chairing the Transport Select Committee, the parliamentary office that holds to account the ministers and the operations of the Department for Transport, where he now holds an influential position.

Among the first to congratulate the new minister, was Darren Caplan of the Railway Industry Association, who expect to have the minister as a speaker at their annual meeting this week. “Huw Merriman was a respected and accessible Transport Select Committee Chair previously, and will bring a huge amount of knowledge and experience to the role”, said Caplan.

The grilling of Merriman

First crisis on Merriman’s new desk at Horseferry Road is likely to be a familiar three-letter acronym: HS2. Putting the London – Birmingham high speed line into the overall ministerial brief for railways is bound to be a relief to that project. With the cost of the line now being estimated at beyond 150 billion pounds (180 billion euro), it has been in the crosshairs for an expected savage cull of government projects, in an effort to stabilise the parlous UK economy.

It is only two weeks since Huw Merriman was giving no quarter to the previous debutant transport secretary, Anne-Marie Trevelyan, in her first appearance in front of his Transport Select Committee. Now, of all the former transport secretaries currently out of the government, and probably in need of a position of some importance, if not influence in the Sunak cabinet, who do you think might be best suited to take over Merriman’s seat on that Committee? The honourable member for Berwick is currently sitting on her hands, watching the East Coast trains go by. Now, that would make for a very interesting sitting, and one suspects the heaters would not need to be turned on in the chamber for that one. The grilling of Merriman would be hot enough.

For sake of UK infrastructure – and for railways…, now Goal of infrastructure – should be top priority?
(In EU, where devastatingly, still neither goal, nor strategy, of infrastructure exists- corresponding Goal of “Union”… – a fact that, most surely, contributed to Brexit.)
In any case regardless of Brexit, Goal of UK should remain, nearness to Market – and accordingly nearness to ports, gates of Nation (Advantage of being an island).