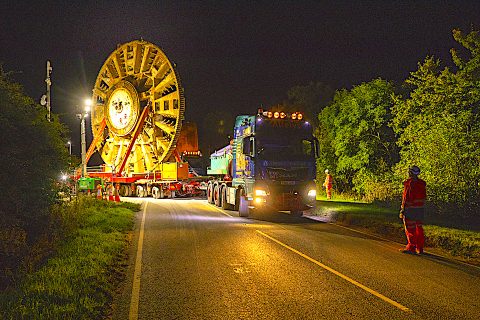 A night-time operation in Warwickshire in central England saw the giant cutter-head from the ‘Dorothy’ Tunnel Boring Machine (TBM) move through the countryside above the Long Itchington Wood Tunnel to a new location, so that operations can begin on a new bore. The 160 tonne cutter-head was moved upright on a 12 metre-long, 48-wheel Self Propelled Trailer on its 2.5 mile (4 kilometre) journey.

Once reassembled, ‘Dorothy’ will start her second tunnel bore later this year. After HS2’s first tunnel breakthrough at the south portal site in July this year, the front part of ‘Dorothy’ has been dismantled and transported back to the tunnel’s north portal. Dramatic photos and video captured the night-time transportation.

Britain’s high-speed rail project, HS2, is not quite moving at the anticipated 250 miles per hours (400kph) just yet – but the project managers are not too worried. Everything is moving as planned, albeit at a more sedate pace of 150 meters per day. At least it will be, when the Long Itchington Wood Tunnel TBM gets back to doing its designed task, and starts work on the tunnel’s north portal site in Warwickshire.

The cutter-head, weighing 160 tonnes and with a 10-metre diameter, was moved last week, during the night of Wednesday 21 September, to its second point of entry. The TBM’s 120 tonne tail skin, also 10 metres in diameter, was also moved in the same operation. Eight other large pieces from the TBM’s shield have already been transported by specialist equipment. The rest of the 120-metre long TBM will be pulled back through the one-mile (1.6km) tunnel by a special ‘caterpillar’ system, also at a pace of 150 metres per day. Once all the parts are back at the north portal, the TBM will be reassembled before starting the second bore later this year.

“This has been an intricately planned operation, using specialist equipment to transport these large, heavy pieces of machinery safely and carefully, over a 2.5-mile route [4 kilometre], and onto our north portal site”, said Tom Comer, the logistics manager for the transport contractors Balfour Beatty VINCI. “We worked closely with the local authority, Warwickshire Police and British Transport Police, and would like to thank them for helping us ensure a safe operation, carried out at night to minimise disruption to the local community as much as possible.”

Work is now underway to reassemble the TBM ready for the start of the second bore of the tunnel later this year. Breakthrough is anticipated next summer. It will be the first fully completed twin bore tunnel on the HS2 project. Eventually, the project will connect London and Birmingham with a new, high speed railway, with onward connections being built to Crewe to connect with the West Coast Main Line.