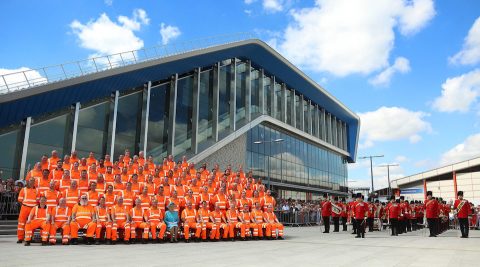 UK National Mourning: impacts and legacies on the railways

The death of Queen Elizabeth has enormous long-term implications for the constitutional UK, but also very practical implications for the immediate future on the railways. Already, the ongoing industrial action supporting a catalogue of disputes has been suspended. Meanwhile Network Rail, the infrastructure agency, has warned of phenomenal additional passenger traffic into London, Edinburgh and other locations with royal connections, including Windsor, where the late Queen will be laid to rest.

British industry is braced for next Monday, 19 September, which will be the State Funeral of Queen Elizabeth II, and will be treated as a public holiday, in the form of a Day of National Mourning. However, much of the work of the UK will continue, and freight operations, and planned engineering works will continue, insofar as any aspect of public life in this week will be normal.

Britain’s official period of mourning will continue until next Tuesday, the day after the State Funeral for Queen Elizabeth. If there is some uncertainty over exactly what demands that will place upon the nation – and the railways – then put that down to the fact that the last state funeral was in 1965. That was for Winston Churchill, back when The Beatles and steam engines were both still in their swan song.

Peter Hendy, the chair of Network Rail, issued a brief statement on behalf of the infrastructure agency. “It is with great sorrow that we have learned of the death of Her Majesty Queen Elizabeth II.  We send our deepest sympathies to the Royal Family.” In a wider statement, the industry representative body, the Rail Delivery Group, has urged the public to plan their journeys during period of National Mourning. “Services and stations are likely to be extremely busy over next nine days”, they said on Saturday (10 September). They also said that there will be some changes to ticketing arrangements related to the commemorations, meaning most people will be refunded for journeys booked in advance that will no longer be possible.

Plan ahead advice for everyone

“Understandably, many people wish to pay their respects to Her Majesty The Queen during this period of National Mourning”, said Jason Webb, the Rail Delivery Group’s Customer Information Director. “On the day of the funeral, Monday 19 September, people should plan carefully the timing of their journey home as trains and stations are likely to be extremely busy.”

According to the RDG, it will not be possible to view both the funeral in London and also travel to Windsor, where Her Majesty will be laid to rest. Normally, that’s an easy commuter journey of just 25 miles (40km), taking as little as 25 minutes. “People should plan to view one or the other and allow plenty of time to travel to either location”, says the RDG.

Many good memories, many great legacies

“Her Majesty The Queen has a long tradition of supporting Britain’s railways and has attended many celebrations on the railway during her 70-year reign”, said a formal statement from infrastructure agency Network Rail.

Among events at which she presided, was the Royal Opening of the Borders Railway in Scotland – which she performed on the day that she became the longest reigning monarch in British history. A few months later, she was on site to launch Birmingham New Street’s “Grand Central” redevelopment project. However, the single most iconic image from an extensive portfolio was taken at the opening of the 895 million pound (over one billion euro) redevelopment of Reading station, in Berkshire, not far from Windsor Castle. For the official opening, in July 2014, Her Majesty posed with more than 100 railway workers for a special photograph to mark the occasion.

It was only in May that The Queen performed her last railway related official duty. For many years to come, millions will remember the part they played celebrating the life of Elizabeth. For many millions more, there will be the final lasting legacy of her reign: The Elizabeth Line.