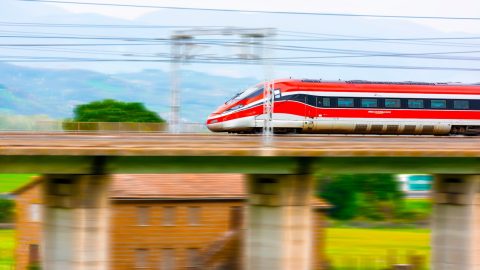 As the end of the year is approaching, Iryo is preparing to enter the Spanish high-speed rail market in full force. The 25th of November will mark an historical day, as for the first time in Europe three national and foreign rail companies are going to compete at high-speeds. Will this follow the Italian liberalisation experience or are we entering unexplored territory?

Iryo recently announced its commencement of operations, scheduled at the end of November. The company, as explained in previous articles, is a consortium between Trenitalia, Air Nostrum and Globavia. For a year now it has been testing its brand new “Frecciarossa 1000” trains on the Spanish lines, and after some disagreement with ADIF over capacity allocation, is ready to launch the first services. Together with Renfe and Ouigo, a SNCF subsidiary successfully operating in Spain since 2021, Iryo will be the third company to enter the market.

Following the liberalisation process that resulted in the complete network opening in 2020, ADIF identified three main high-speed corridors on which to promote open market for operators: Madrid-Barcelona, Madrid-Levante (Valencia and Alicante) and Madrid-Toledo-Sevilla-Málaga.

On these corridors the optimised (perfectly cadenced) network’s capacity has been computed and split into 30 percent for annual allocation and 70 percent distributed over three framework agreements. The latter was divided into the following packages: A covering 60 percent of the framework agreement’s capacity, B covering 30 percent and C covering the remaining 10 percent. The decision to directly award 70 percent of the optimal network’s capacity while keeping the remaining 30 percent open for yearly bids, can be seen as an attempt to allow some flexibility in the service provision and to respond to demand peaks in the future.

For each of these packages, an international tendering process awarded the service provision to the operator that could ensure the most intensive use of the capacity within the package. Other factors for being selected where for example the availability of rolling stock or the willingness to offer services on less popular routes and not only on the most profitable Madrid-Barcelona route. Subsequently, a 10-year framework agreement was signed to ensure legal certainty and to guarantee a long-term commitment of the rail undertakings.

The most consistent package, A, was awarded to Renfe, package B, to Iryo and package C to Ouigo. Operators must comply with their path requests or penalties are being imposed. It is estimated that the capacity could increase by 65 percent on the three identified corridors, with Renfe alone for example increasing by 13 percent its service provision in relation to current HS network traffic.

Competition brought to a new level

For the first time in Europe, a national high-speed network will witness three operators, with two of them coming from abroad. Until now, the only existing example of high-speed rail competition was Italy, where Trenitalia and NTV have been fiercely competing since 2012 with very good results. Although it may seem a similar evolution, some key difference make the Spanish approach a completely different liberalisation process.

Firstly, the Spanish network differs from the Italian one both in geographical and policy terms. The former has a less dense and more distributed structure, and only the aforementioned corridors have been tendered out instead of the entire high-speed network as in Italy.

Secondly, in Italy companies have a more direct access to the market and are not bound by a 10-year framework agreement as in Spain, having more flexibility to design their service.

Thirdly, and probably the most significant difference, Spain’s incumbent Renfe will compete with two foreign companies that have a long experience in high-speed services. Ouigo is almost at ten years of low-cost high-speed rail operations, whereas Iryo can bank on the experience gained by Trenitalia, which has been in direct competition with NTV for almost a ten years.

These differences will probably lead to a new concept of high-speed rail liberalisation, with the combination of highly experienced players and a more regulated capacity allocation leading to both benefits and downsides at the same time. Having fixed capacities ensures that also non-profitable train routes will be served and that smaller companies can survive better without the fear of being cut out.

But not having this fear could also trigger lower service performances because already having the paths decreases the need to be better than the competitors. In general, competition is expected to reduce the prices, increase the service quality and the frequencies.

Concrete dynamics of this liberalisation process are yet difficult to predict, and only in a few years, when the market will be fully operational, can lessons be drawn. For now, witnessing the second biggest high-speed network becoming partially liberalised, is a positive sign for Europe and an example for other countries. Opening up to competition does not mean damaging national incumbents or lowering the service quality. Instead, it can improve the transport performance of a network and its customers’ satisfaction. Italy already showed it is possible, Spain will soon follow.

The international vision behind Iryo

The new company formed in 2015 by Air Nostrum and Trenitalia, and more recently Globavia, is a long-term investment vision of different transport players. Air Nostrum, part of the Iberia group, represents the willingness of an airline to diversify its portfolio. Following the legislation on short-haul flights recently adopted by France, more airlines are looking to complement planes with trains for access and egress trips to and from airports over medium/short distances.

Trenitalia, on the other hand, is expanding very fast on the rail markets of Europe. It acquired the Greek railways in 2017, is the second regional operator in Germany through Netinera, will operate the British high-speed trains from 2026 onwards together with FirstGroup and now has entered the Spanish high-speed rail market as the second biggest player after the incumbent.

The possibility for Trenitalia to expand internationally would not have been possible without competition improving its service and economical performances. This additionally proves that competitive environments, if properly regulated and managed, can strengthen companies and improve the service quality they provide to the customers.