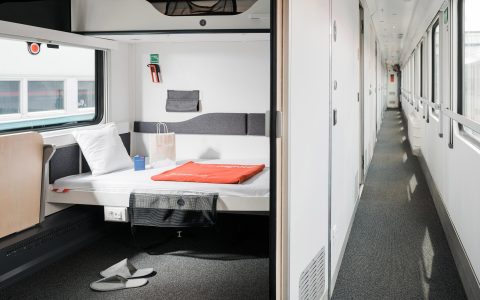 If operators of night train services focus on increased levels of comfort and more privacy for travellers, people will be more inclined to use sleeper trains, researchers from consultancy firm Royal HaskoningDHV and Delft University of Technology have found.

In a study published earlier this month, a team of five researchers set out to uncover “if and under which conditions” travellers are willing to use night train services across long distances. According to the group, studies concerned with sleeper trains specifically are absent in the body of international scientific literature.

To eliminate this knowledge gap the researchers began collecting data in 2019, collecting a total of 804 completed surveys. They subsequently performed a comfort rating and a mode choice experiment.

In line with other research on long-distance train travel in general, the choice for a certain mode of transport was found to depend on comfort, travel cost and travel time. With an arrival time in the early morning, night trains have a slight edge over morning flights with business travellers, for example.

The main determinant, however, is comfort. This perceived comfort level is “heavily influenced” by the number of people sharing the space. So much so that when given the choice between a private accommodation for only two people in a very basic night train or sharing a space with six others in a more luxurious sleeper train, respondents would prefer the basic train, and give a higher comfort rating.

As such, the researchers recommend that night train operators should consider more private compartments. It would also appear beneficial to target business travellers through specific product offerings. Teaming up with travel agencies could be worth while in appealing to leisure travellers, who are less focussed on comfort but who want an easier booking process, for example. Prospective travellers could be convinced with a wider range of on-board activities.

In recent months, new night train operators such as European Sleeper and Green City Trip have indeed teamed up with travel agencies, joining forces with Subweb and TUI, respectively.

The potential for night trains notwithstanding, the researchers also point out that many of the obstacles that have prevented a breakthrough in the past, are still present. These include high operating costs and limited available track capacity.

While ÖBB and Deutsche Bahn and working hard to upgrade the Nightjet couchette cars, many new players don’t have the financial muscle to do the same. A recent travel report by Dutch sister publication SpoorPro on a trip from Utrecht to Prague highlighted outdated rolling stock as one of the major letdowns.

Travelling cross-continent also means liaising with a great number of third parties. This, in combination with a lot of ongoing track maintenance, has recently also resulted in delays. In a much-publicised incident in July, Swiss Green Party parliamentary leader Aline Trede became stranded in Basel after her Nightjet train to Amsterdam failed to show up.

The study ‘Willingness to use night trains for long-distance travel’ will be included in the forthcoming edition of the scientific journal Travel Behaviour and Society, which will be available in October.