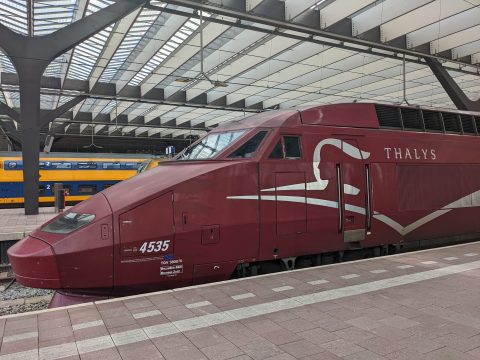 Thalys will be offering less services across the Netherlands, Belgium and France “in the coming weeks” as a result of two “operational incidents” earlier this month. This necessitated two additional trains going into maintenance.

Last week, a Thalys train ground to a halt just outside Gare du Nord in Paris, with travellers stuck inside amidst scorching temperatures for hours. A video of a passenger breaking a window went viral. Thalys later said that the problem was heat related and caused by a failed compressor.

A few days later, a train with 270 passengers on board came to a standstill due to a loss of power in the north of France. It reportedly took 2,5 hours before travellers were allowed to disembark the train. The trains are undergoing repairs in Brussels and Paris, respectively.

The incidents threw the timetable into disarray, with more stranded passengers elsewhere as a result. In Brussels, travellers had to sleep on board a Thalys train as the company was not able to arrange for a sufficient number of hotel rooms.

To avoid similar situations in the coming days and weeks, Thalys will offer a stripped-down timetable, a spokesperson confirmed on Friday, adding that the company offers its apologies for the inconvenience. “We regret this extraordinary situation. We attach great importance to customer satisfaction and will go above and beyond to resolve this situation the best we can”. Affected passengers have been offered compensation to the tune of 250 percent.

In case of a cancelled service in the coming weeks, passengers can postpone their reservation free of charge or get their money back.