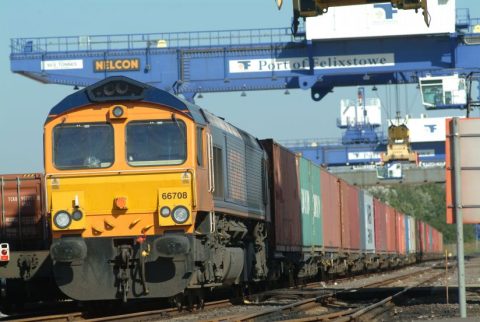 UK transport secretary Grant Shapps is adamant that the strike on the railways of Great Britain will not lead to empty supermarket shelves or disrupted power station fuel deliveries. However, there is nothing good about curtailed freight train movements, which commentators claim are down by fifty per cent. If half the freight trains are not running, then there is little prospect of freight deliveries and supply chain issues getting any better. Nowhere is that more apparent than in the UK ports.

Across Great Britain, the ports remain the mainstay of traded goods, and that trade is going nowhere without the help of rail freight. The political rhetoric says the strike is only effective for three staggered days in one week. Critics point out it was also only a week for the Evergiven to block the Suez Canal, and the effects of that intermodal stoppage are still unwinding in the ports of the world. Meanwhile, the railways of Britain are almost deserted for a second day this week.

Port traffic is critical to life on the British mainland. Napoleon knew it and, without making any cynical comparisons, the rail unions know it too. The current series of one-day stoppages, brought on by strike action by members of the trades union, the RMT, has brought to a halt the passenger train operators with whom it has a grievance. It has also forced many freight trains off the rails because the strike extends to Network Rail signalling staff, too, leaving the lights red across the network.

UK government sources have raised the issue of agency staff as a means of keeping the railways running. Transport secretary Grant Shapps has been widely ridiculed for making this claim. Industry observers have, at best called it a ‘red herring’ manoeuvre to distract from the real issues of pay, conditions and job security. Others have impolitely called his proposals incompetent and ill-informed of the highly-skilled nature of the rail industry.

While the impact on freight flows has been played down by the industry at large, there are significant efforts being made behind the scenes. Operators have been largely silent, but some statements have been made. “Freightliner strongly urges Network Rail, the passenger operators, the RMT and Government to reach a swift agreement to avoid the significant disruption that the series of strikes will cause”, said a statement from that company. “Although Freightliner is not a party in the dispute, the implications for the rail freight sector and customers will be severe.” Freightliner admired in an interview given to regional media in Wales that less than a third of freight trains will be able to run during the strike week. “[This is] having a devastating impact on the UK’s already stressed supply chains.”

Carlisle-based Direct Rail Services, born out of a specialist career in nuclear fuel materials, has said it is aware that industrial action affects the rail network as a whole. “We are working closely with our customers and partners to ensure we can minimise its effects and deliver safe, secure and reliable services”, the company told print media sources.

As bad as it gets for rail freight

Network Rail, the government’s infrastructure agency, which will be replaced next year by the broader responsibilities of Great British Railways, is clearly stressed by the action. “We are working nonstop to keep nationally important freight flows – including supermarket supplies and fuel – moving during strike action”, said Jake Kelly, their Network Operations Director.

While the potential loss of bulk flows – particularly aggregates – may not have an immediate impact on the economy, there is only so much that ‘just in time’ Britain can stockpile. “The pattern of proposed strike action is about as bad as it gets for rail freight, with disruption likely across the entire week and into the weekend”, said Maggie Simpson, the director general of the Rail Freight Group, the sector’s representative body. “Even with contingency plans in place, the industry still expects serious impacts to supply chains. It is damaging to customer confidence in rail and future growth.”

A political comment is curtailed today (Thursday, 23 June) in Britain due to two by-elections for Parliament taking place. The ruling Conservative Party currently holds both seats, but the strike is expected to play a part in the outcomes at both Wakefield in the north and in Devon in the southwest of England. Wakefield, traditionally a socialist-voting constituency, may be lost, and there are even concerns within the Conservative Party that the massive majority in Tiverton and Honiton earned in the last General Election may not be enough to hold on to the seat in the face of the crisis. The government’s supply chain of willing voters may be drying up at the wrong time.

Britain’s ports have already been in the firing line for industrial action this year, and the RMT has again led the way. In a widely-condemned move by ferry operators P&O, staff were summarily dismissed and replaced by agency staff to cut costs. It’s been a move that has badly backfired on the company, with government contracts cancelled, public boycotts and picket lines from Scotland to Southampton. In that dispute, the effect on rail freight has been marginal, but it has been felt much more so in the current conflict.

Similarly, just as the maritime industry was getting on top of the stack of containers washing up on all the wrong shores, the real supply chain is in danger of a new setback. Whether to offer more trains and alienate a substantial part of the population or take no proactive action and alienate a considerable part of the population is a choice with no tangible winning outcome. The rail freight industry is, once again, not through its own doing nor, for the first time, caught in the jaws of a dilemma.

Railways, now proves too vulnerable, thereby, regrettably, not high quality, but simply the weak “link”.
“Optimal maintenance”, just sufficiently, is good, but a sustainable track, a safely calculable, with safety factors…, as at any other public enterprise, now is the min.!
(Being mature, shall not prevent, for turning timely!)
High quality, On Time deliveries of cargo, etc., is more important, than ever – and accordingly, now, handsomely rewarded – by willingly paying clients!