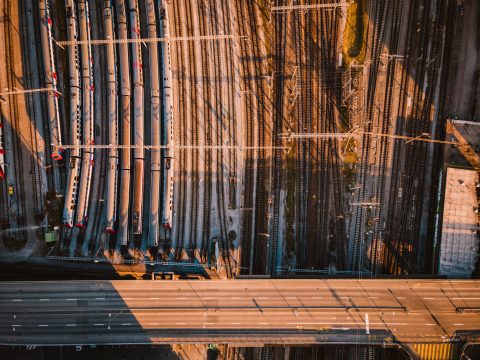 Increasing capacity on rail: why not couple moving trains?

What if you could run more trains on a railway by coupling different trains while they are running? That is the aim of Israeli startup DirecTrainSystems (DTS), building on know-how of refuelling airplanes mid-air. This also sounds difficult, but has been in practice for many decades. The company will give a workshop on RailTech Europe on 21 June about the concept of coupling trains.

The idea in itself is quite simple: by physically connecting running trains, more trains can run on the same track. Once coupled, the usual minimal distance for braking no longer applies. “The number of passenger train services on a line can be increased, as will the capacity for freight”, says DTS CEO Alberto Mandler. In an analysis carried out with Delft University of Technology in the Netherlands, an increase of capacity of up to 40 percent could be achieved based on simulations. This would require changes to just 1 percent of the existing rail infrastructure.

Ishay Erel, business development manager of DTS explains: “Imagine point A in the suburbs of a city. A direct train from the suburbs (A) to the city center (C) does not stop at any stations in between. Due to capacity constraints, an additional train from intermediate station B to the city centre is not always possible. With dynamic coupling technology, a train leaving station B could physically connect to the direct intercity on the way, and together run into the city centre. This connected train, or platoon, requires less space on the tracks.”

Mandler and CTO Moti Topf are both engineers, and have a background in aerospace design. This expertise, they say, can also be translated to the rail sector. Moti Topf: “Refuelling in the air is arguably even more difficult than coupling moving trains, yet coupling trains has not yet been developed.”

A Vehicle-to-Vehicle (V2V) radio layer enables trains to exchange information such as the train’s speed, acceleration and position. For the coupling, Automatic Train Operation (ATO) will briefly take over. However, the trackside installations needed for this do not have to be installed on the entire railway line or network.

It will be limited to “coupling zones”, which are the only those areas where trains would be allowed to couple while running and thus come at closer proximity than the normal absolute braking distance. “These sections are approximately 2 kilometres in length, and defined by the infrastructure manager. Because they are short and specifically designated sections, existing regulations do not have to be changed for the whole line”, says Mandler.

The system will be compatible for tracks with any signalling system, as the train driver keeps the train running with its normal signalling for the rest of the route outside of the coupling zones.

From simulations to testing

Over the past three years, DTS has done simulations with real train data to simulate and digitally verify concepts and algorithms. Now, the startup is looking for funding to complete an operating prototype, as well as railway companies to partner up with and test the system.

First, DTS will focus on tests and installations on freight trains and the supply-chain, and aims to start trials with trains that are more similar to each other, says Mandler. “For this we shall have a prototype ready in around 2,5 years, and a working product within four years, assuming the necessary funding is secured. Three years later, the system could also be completed for passenger trains.”

Once the technology is proven, it can immediately be implemented on a small scale. A retrofit kit to install the coupling technology would be provided to railway companies, so it will not necessary to acquire new rolling stock.

“For freight this means that companies can provide more services in the same slot. Using connected trains, you can use blocked sections on the line”, says Mandler. In addition, the system of coupling moving trains can also be used for urban and inter-city parcel transport, for which wagons with parcels can connect and ‘piggyback’ to a passenger or freight train. Decoupling in the right area offers more flexibility than regular-length freight trains. “For parcels, our rough calculation is that 70 percent of CO2 emissions can be reduced by shifting parcels from the road to rail in this way”, says Moti Topf.

“There is also a large energy gain, as a train that is already driving does not need to decelerate and accelerate, which is where most energy is lost”, says Leah Mandler, VP Marketing at DTS. The main gain of DTS’ technology, according to the startup, is providing a direct commute to cities, which will increase the shift of passengers and goods from private road traffic to rail and result in reduction of traffic congestion and CO2 emissions.

“New lines are also a huge investment. Using existing tracks, rail providers could use the DTS system in the way they need. The previously mentioned use cases of platooning passenger trains and transporting parcels are some examples, but we don’t know the full potential of the concept yet. There are more possibilities, no doubt.”

Interested to learn more? Alberto Mandler and Moti Topf of DTS will be giving a workshop at the RailTech Europe exhibition in Utrecht, the Netherlands on 21 June. Get your free ticket here.

Added, high, capacity, utilisation of investments made, yes – and single (technicalities), however, not shall hinder another.
Basics now remains, to attend “bottlenecks”, those obvious, “elephant in room”!
It is 2022 now and robustness, readiness for meeting with anticipated, most rapidly added competition, from other available devices, etc.,., has to be ensured.
(At infrastructure, investments, reinvestments, etc., strategy now has to include ensured “height”, for added load capacity, etc.”!)