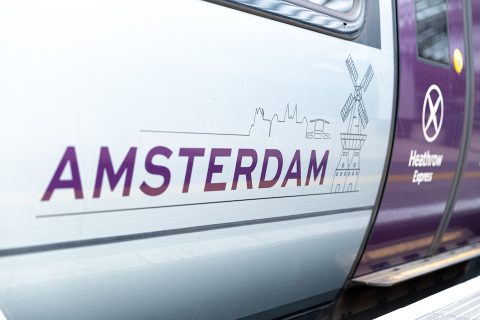 Heathrow Express, the premium rail service between London Paddington and the airport, has been out-shopped in a series of new liveries, designed to highlight important world-wide destinations, including New York, Sydney and Amsterdam. The eye-catching branding, not just coincidentally, has been unveiled just as Elizabeth Line trains have begun running into the airport’s rail network.

London itself features in the portfolio of international destination themed liveries that, according to Heathrow Express, are a celebration of global travel. Rail connections play a critical part in making it possible for Heathrow to handle upwards of 80 million passengers a year – a figure that made it the busiest airport in Europe prior to the pandemic. It has since slipped to number five on the list. Future rail proposals aim to make the airport even better connected, now that its expansion is back on the agenda.

The dedicated trains of Heathrow Express are now carrying the name of one of twelve cities from around the world, in a celebration of global travel. The cities were chosen in a public poll, organised by a London radio station, and represent the most popular international destinations reachable direct from Heathrow.

The carriages were unveiled on Wednesday at Paddington Station by Sophie Chapman, Business Lead and Director of Heathrow Express, along with representatives from parent owner Great Western Railways (GWR) and the destination management company London & Partners. The ceremony came just a day after The Queen made a surprise visit to the station to formally unveil the Elizabeth Line station at Paddington.

When the airport began passenger operations softly after the Second World War, it was difficult to reach and in a largely rural area to the west of London. That of course has radically changed in the intervening decades, and the biggest difference is in the rail connections available. Now that the new Elizabeth Line services have commenced, there are three options available to passengers, Including the established Heathrow Express, and the original rail service – an extension of the Piccadilly Line London Underground service.

The rail network at Heathrow is almost as vast as the airport itself,. Three stations cover the four active passenger terminals – with a fourth station just to the east of the perimeter (Hatton Cross) serving as a junction between the two branches of the Piccadilly Line. Underground trains are much slower but cheaper than the Heathrow Express – but do travel directly into Central London. Also priced as part of Transport for London (TfL) the Elizabeth Line services are now serving intermediate stations from London Paddington along the same route as the Heathrow Express. Later this year, Elizabeth Line services will be completed through Central London and on to destinations in the financial district of the City.

Although Heathrow is also a vital part of the UK freight logistics network, none of its goods traffic is moved on by rail. However, aviation fuel is transported, on a dedicated freight branch line, to a storage facility on the north west edge of the 3032 acre (1227 hectare) site. There are no immediate plans to bring in goods by rail – although the possibility of light logistics operations are being examined.

At present all the rail connections face eastwards – towards London. Several plans have been tabled in the past – most prominently to connect the airport directly to the West of England main line in a westerly direction towards Reading, Bristol and Cardiff, with potential to serve Birmingham. A whole network of connections has been proposed to the south of the airport, but these plans have always been hampered by the intensive commuter operations on the existing lines and a large number of level crossings which would prove difficult to eliminate. Hopes of a direct connection to the HS2 project were dashed at an early stage of that project. Ironically, Heathrow’s operators have already benefitted financially from HS2: they were compensated for the demolition of their depot at Old Oak Common – to make way for the building of the new high speed station at that north west London location.