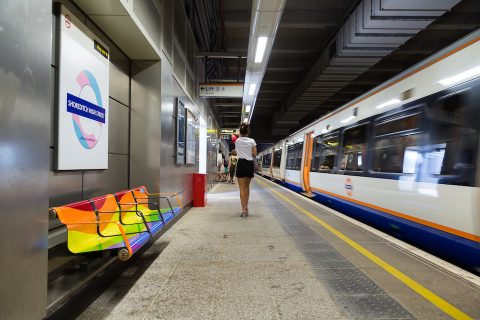 Transport for London has been granted a second massive bail out package by the UK government. Westminster has agreed to a package of support, worth 1.8 billion British pounds (two billion euros) to keep services running. The elected major of London, Sadiq Khan, had pleaded the case for the support, in the face of an almost complete collapse of fare revenue since March. According to reports in the British media, without a bailout the network would have been forced to issue a Section 114 order, the equivalent of bankruptcy for a public company in the UK.

Transport for London, which runs the Underground, as well as many surface trains branded as London Overground, the extensive autonomous Docklands Light Railway network, and several other road and river services, has been in the spotlight as a critical example of the grave challenges facing urban public transport operators in the UK and other parts of the world. Pictures of deserted stations, normally teeming to overflowing, have been daily reminders of the depth of fall in passenger numbers.

The network, upon which London is completely reliant for economic activity, and which itself relies on almost maximum capacity at all times to remain solvent, says it has been teetering on bankruptcy since the initial lockdown in the UK in March. Now, with England just days away from a month-long second lockdown, this financial bailout package has come in just in time.

There is general relief at the TfL Stratford headquarters in the east of London, but the bailout comes with conditions attached. When the operator appealed to the UK government earlier in the year, Westminster made the relief conditional on implementing some reforms, which had long been resisted by the London mayor and the city’s socialist-led administration. These conditions included fare reform and staffing, as well as wider transport issues.

The RMT trades union (Rail Maritime and Transport) has pledged to resist any cuts. “It is deeply troubling for TfL staff that this short term deal is loaded with strings that amount to at least 160 million (180 million euros) of cuts with the very clear threat of worse to come”, said RMT general secretary Mick Cash. “Staff who have been keeping essential travel operating and London moving should not pay the price for this pandemic. We will fight any attempt to attack jobs, pensions, working conditions and safety.”

Help London through the next phase

Speaking to the BBC, the mayor of London said the settlement was not ideal, and that he had fought hard against the very worst conditions imposed. “The only reason TfL needs government support is because its fares income has almost dried up since March”, Mayor Khan said. His TfL commissioner Andy Byford said the agreement allows TfL to continue supporting the capital for the remainder of the financial year. “Reaching this agreement with the government allows us to help London through this next phase of the pandemic”, he said.

Among the conditions on the table was a vast extension to London’s congestion charge zone, which was not implemented. However, London will now have to pick up the cost of age-related concessionary fares, and general fares will rise in the new year. The likely effect is an increase in local taxation for the whole of London in 2021.

However, the bail out does not reach every aspect of business on the Underground. For as long as there have been trains running on the world’s first and most extensive urban transport system, there have been traders too, servicing the needs of the travelling public. There is scant support for them in the package.

Clare Bailey, an independent retail expert, with experience in the rail sector, says it is not just the rail operator that is suffering. “The London Underground is a major part of the retail and commercial life of the capital”, she says.

“Lockdown and the effects of the coronavirus pandemic have been brutal for hundreds and hundreds of traders who operate from station concourses and from premises within station buildings. Anyone who travels regularly on the London Underground will be familiar with the usual collection of retailers at the entrance to almost every suburban station. The collapse of passenger numbers has been life-threatening for the newsagents, florists, estate agents, coffee stalls that occupy railway premises up and down the network. The bailout does not cover these businesses, and we have a real job on our hands to see them survive, particularly in this month and the rest of this year.”

The network around London continues to grow, to keep pace with the increasing population and modal shift. Transport for London is involved in a number of extensive projects, most notably the nationally significant Crossrail scheme. Work will continue on that, and a portfolio of other improvement works. However, both working conditions and passenger numbers will be affected by a second national lockdown, which covers the whole of England and begins on Thursday. While funding has been secured until March next year, the Underground is far from out of the tunnel yet.

It is being Very political calling it a ‘bail out’.
The funding is a Government Grant – which so many people and companies are receiving.
You do not see in press articles of the 80% of salary (of those who were not sacked during the short end of phase 1) as a Employee/Worker Bail Out.
Only those in “The Land of Nope and Tory” would use the term Bail Out.