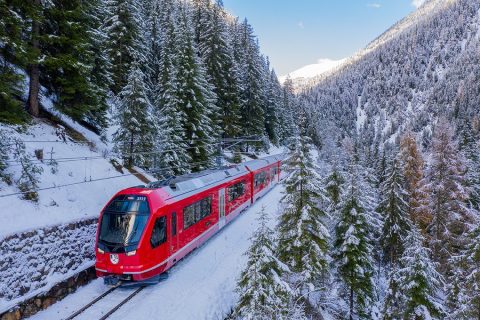 In precisely ten days, Swiss operator Rhaetian Railway (RhB) will attempt to run the longest passenger train ever assembled. In this first part of a two-part series on the record attempt, RailTech.com puts the spot light on the train itself.

For the record attempt, RhB will assemble a train that will stretch across a distance of 1.91 kilometres. For that it will couple 25 of its so-called Capricorn train sets. Manufactured by the Swiss Stadler, these trains measure 76,44 metres each.

With 35 and 129 seats in 1st and 2d class, respectively, the record-breaking train could seat 6,440 passengers. However, they won’t be coming along for the ride due to weight restrictions. The train itself already tips the scale at close to 3,000 tonnes.

RhB purchased 56 train sets at Stadler a few years ago, for a total of 534 Swiss francs. If we do the math, the record-breaking train would carry a price tag of around 245 million euros. The Capricorn train sets have been in service since 2020.

The 1.91-kilometre train requires 7 train drivers and 21 technicians to operate. The drivers can operate up to 4 train sets from a single cabin. The drivers have also taken part in a special training programme for the record attempt.

At will be critically important to set all 25 train sets in motion at exactly the same time. Therefore, a special intercom system was installed with the help of the ministry of Defence. Lastly, the trains’ breaking systems have been adapted to apply the brakes at the same time in case of an emergency.

Another challenge will be accommodating the recuperated energy from the trains’ braking systems. Under normal conditions, energy harvested from braking is distributed to other train sets via the overhead lines and even into the regular power grid.

Tests and simulations, however, have shown that the potential energy generated by slowing down a 1.91-kilometre, 3,000-tonne train would be too much for the system to handle. Therefore, the record-breaking train will run at a reduced speed of 35 kilometres.

Technology partners in the record attempt on October 29 include Stadler, ABB and Siemens Mobility. Railway enthusiasts can tune in Blick TV for a live report.