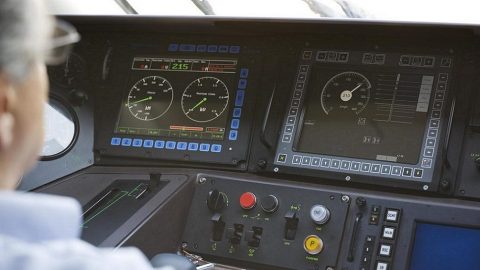 Supplier Alstom has won a contract for to equip 120 SNCB locomotives with train control system ETCS level 2. The project to install the system launches in October 2022 and will run for three years.

Alstom will do the design, delivery and maintenance of the latest-generation ETCS level 2 signalling system (Baseline 3) for 120 HLE18 locomotives of SNCB in commercial service in Belgium, Luxembourg, France and Germany. The contract includes maintenance for 10 years. The ETCS system will be supplemented by national functionalities to allow the trains to circulate in Belgium (TBL1+) and France (KVB) to operate on sections where ETCS is not yet installed on the infrastructure. The lines it operates on in Luxembourg and Germany are already running on ERTMS, so the national systems are therefore not necessary to be installed on the locomotive.

The most advanced version of Level 2, Baseline 3, features optimised braking curves for maximised operational performance and increased passenger comfort. This version also enhances odometric performance, meaning the indication of the distance traveled by a train. This enables drivers to select the appropriate speed in compliance with SIL4, the highest level of safety.

Alstom’s signalling facility in Charleroi will be responsible for the engineering of the various signalling systems and delivery of the on-board equipment. It will also provide maintenance for a 10-year period, including spare parts and repairs. Currently in Europe, over 60 percent of trains equipped with a European-made ETCS have an Alstom system on board, according to the supplier.

This latest-generation ETCS Level 2 train control and supervision system is already being implemented by Alstom in Norway and on electric locomotives operated by České Dráhy in the Czech Republic. It’s now being deployed on the high-speed trains of Deutsche Bahn throughout Germany, and on S-Bahn suburban trains by Alstom and competitors in the Stuttgart region, as well as on various projects in Spain, UK, India, and Australia.