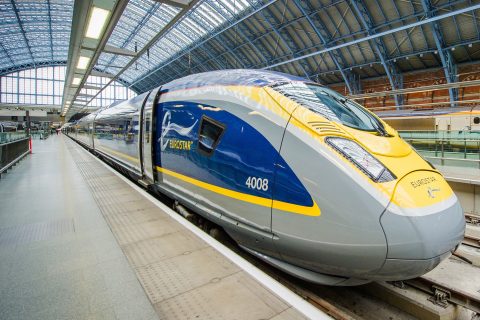 Has the pandemic made an end to regular business travel abroad? Not according to Eurostar, which reports a significant uptick in business travel in the first half of 2022. Business travel on the high-speed rail service that connects the UK to continental Europe is now at 70 percent of 2019 levels, while the number of daily services is still a quarter lower than it used to be.

Eurostar reports that the recovery in business travel between London and Paris following the lifting of corona restrictions has been fastest for French and US companies, with the banking, luxury and consultancy sectors mainly driving the recovery. Business travel volume reached 70 percent of 2019 levels in May and June this year, excluding the days of school holidays and the UK’s Jubilee weekend and national rail strike.

“Business travel has picked up faster than we expected in 2022, especially considering that we are still only providing about three quarters of our pre-pandemic transport plan”, says François Le Doze, Commercial Director of Eurostar. “We are confident that this trend will continue after the summer period, when September is typically a key month for business travel.” At the hight of the pandemic, Eurostar passenger numbers were down with a staggering 95 percent.

Not the end of regular business travel

According to a new survey commissioned by Eurostar, 78 percent of business travellers expect to travel as much between the UK and Europe as in 2019, or more. Face-to-face contact between businesses and customers is the driving force behind travel according to 90 percent of the 1000 respondents. According to Eurostar, the outcome “undermines fears that the new hybrid or 100 percent remote working model is the end of regular business travel”.

This does however mean that for business travellers, 22 percent of the clientele Eurostar had before the pandemic would use the service less, although more and more companies could opt to take the train for business travel. This is also reflected by the growth in the number of corporate accounts at Eurostar by 40 percent since 2019, indicating more companies are indeed choosing rail for their business trips. This data refers to Eurostar corporate customers who have a managed travel account with a dedicated corporate account manager or travel management agency. For smaller companies or companies who travel the distance less regularly, trips that are also for business are likely not all reflected in these numbers.

Eurostar also reports that more than a quarter of the business traveller respondents feel the need to make up for time lost during the pandemic by extending their business trips. 86 percent said to be considering this ‘business + leisure’ approach in 2022.

Sustainability at the core

According to the now sole passenger operator that runs trains through the Channel Tunnel, “sustainability is now at the heart of many business travel policies”. This year, more than 20 percent of Eurostar’s corporate customers are mandating train travel whenever possible. Eurostar’s survey confirms this trend, with a quarter of respondents saying that their employer mandates train travel for business trips. This figure is remarkably higher for smaller companies than for bigger ones.

“It’s great to see that in France and the Netherlands, governments are following the same path as business, using politics to influence travel choices for the benefit of the environment”, says Le Doze. To what policies he is referring to is unclear, although a domestic flight ban came into force last April in France for routes that can be covered by train in two and a half hours or less. A trip from Paris to London is however not domestic. One flight is equivalent to 13 Eurostar journeys in terms of carbon footprint, according to Eurostar.

Several parties in the Netherlands are also advocating for a ban on short flights, but this has not materialised yet. Although a motion to ban flights to Brussels was adopted by the Dutch parliament back in 2019, it was not carried out by the minister at the time because “it would be against the EU rules of a free market”, reported Dutch newspaper Trouw.

To get more (business) travellers to choose the train, it does need to be the most attractive option. “We are committed to working with the rail industry to further optimise our timetables and connections to enable more passengers to choose rail over air”, says Le Doze. With the merger with Thalys ahead, Eurostar has announced the addition of a fourth return service on its London-Amsterdam route from September. The new train will leave London at 6.16 am, which is specifically to better serve the needs of the business market.