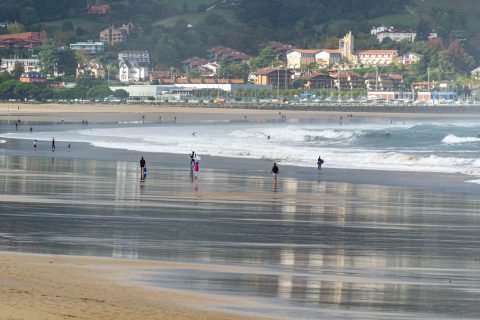 The extension of the night train Paris-Lourdes to the Basque coast was launched by SNCF last Friday. The night train to Hendaye runs for two months this summer, until 28 August.

Brought back last year after being out of service since 2017, the night train runs from Paris to Lourdes in the South of France on the border of the Pyrenees mountains the whole year. This summer, it continues westwards towards the Atlantic coast to Hendaye on the border with Spain, in the French part of Basque country.

From Paris Austerlitz station, the new destinations this summer are Pau, Orthez, Dax, Bayonne, Biarritz, Saint-Jean-de-Luz and Hendaye. The night train service offers a daily return trip from Paris to Hendaye via Lourdes. The current popularity of this night train is ‘undeniable’, according to SNCF. The first trains to the Basque coast are fully booked. The five-car night train offers three different spaces: 1st class, with compartments of 4 berths, 2nd class, with compartments of 6 berths and seats.

The extension to Hendaye was included in France’s recovery plan after the coronavirus pandemic called ‘France Relance’. 40 percent of the plan is financed with funds from the Recovery & Resilience Facility of the EU. The plans for the development of new night trains were announced in September 2020, with a budget of 100 million, says SNCF. The return of the Paris – Lourdes night train in 2021 was also part of the plan. Also, a night train from Paris to Vienna (Austria) was launched last year.

Showers have been available at Paris Austerlitz station since last year, which is free for 1st class customers on night trains. This facility consists of a waiting area and six individual showers, two of which are accessible to people with disabilities. The Intercités night train services in France currently also connect Paris – Nice, Paris – Toulouse, Paris – Rodez / Albi, Paris – Latour-de-Carol / Cerbère and Paris – Briançon.

In addition, a programme to upgrade the carriages and adapt the rail maintenance facilities for the Paris – Nice – Paris and Paris – Lourdes – Paris lines is planned as part of the French government’s recovery plan and will be financed by the state (Agence de financement des infrastructures de transport de France – AFITF), for 100 million euros.

I cannot perceive that as competitive, except for a few travelers that want to save a hotel night at Paris (however, the French night trains have no sleeper compartments). But a night train route like Amsterdam to Hendaye and/or Paris to Madrid would be much more attractive.