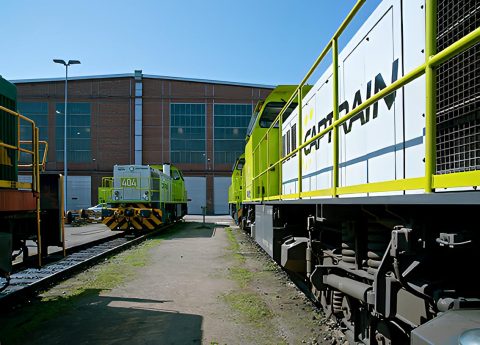 The first step in the collaboration between the two companies will be launching the HyShunt project: a project to retrofit a locomotive currently powered by a diesel engine. This locomotive, with a power of approximately 700 kW, will be retrofitted with a decarbonised electric propulsion system powered by green or low-carbon hydrogen via a high-powered fuel cell system manufactured and integrated by HDF Energy.

Captrain France President, Stéphane Derlincourt, commented: “I am delighted to sign this partnership with HDF, whose level of expertise is unique. At Captrain France, we are very enthusiastic about the idea of developing the very first zero-emission locomotive for our customers’ industrial sites. The urgent concerns about global warming are generating adaptations on all sides, and freight transport is no exception. This locomotive will be completely innovative and equipped with future-oriented technology.”

Today, rail freight accounts for only 9 per cent of goods transported in France, compared with 17,3 per cent in the European Union. The French government’s objective is to double the modal share of rail freight by 2030 and then increase it to 25 per cent by 2050, highlights Captrain.

With only 58 per cent of the French rail network electrified, the development of dual-mode electric and hydrogen solutions will make it possible to cover the entire network and industrial sites with zero emission solutions. It added that the project aims to demonstrate that retrofitting a locomotive can achieve strong decarbonisation objectives for rail freight.

In addition, the HyShunt project is “a virtuous and frugal project that favours the re-use of existing equipment.” Captrain France will provide a locomotive built in the 1950s. It will be upgraded, and its service life extended.

This first French hydrogen shunting locomotive is part of the hydrogen ecosystem being developed in Moselle in eastern France.

However, the locomotive retrofit project will also be part of the Grande Région Hydrogen initiative, the first cross-border Hydrogen Valley, involving French, German and Luxembourg industrial partners. The high-powered fuel cell will be produced in the future HDF Energy plant in Blanquefort, which will be operational in 2023.