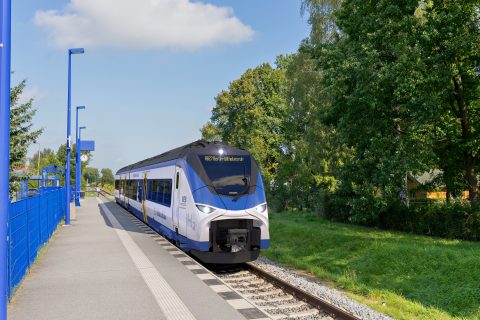 Niederbarnimer Eisenbahn (NEB) has ordered seven Mireo Plus H hydrogen trains from Siemens Mobility. Delivery is set for autumn 2024, with first operations on the Heidekrautbahn (RB27) network planned in December the same year.

For Siemens Mobility, it is the first order for a fleet of trains using hydrogen technology. For regional operator NEB, putting the first hydrogen trains into service in the region surrounding capitol Berlin in 2024 would be a milestone.   “We are proud to operate the Heidekrautbahn, the first rail network in the Berlin-Brandenburg region that will be using hydrogen fuel cell trains,” said Detlef Bröcker, CEO Niederbarnimer Eisenbahn (NEB). “By operating a technologically and ecologically upgraded railway, we want to actively support the energy and transportation transition and make local public transport for more attractive for both commuters and tourists alike.”

The Mireo Plus H trains have a top speed of 160 kilometres per hour and can be refuelled in 15 minutes. The train was presented last May at the Siemens factory in Krefeld. The hydrogen system has 1.7 MW of traction power providing up to 1.1 m/s2 acceleration. According to Siemens, the lightweight aluminium construction and improved aerodynamics make the train more energy-efficient. Within the contract, Siemens Mobility will also provide ten years of service for the NEB trains, and a spare parts contract (TSSSA) is included up to 2034.

The use of hydrogen-powered trains on the Heidekrautbahn is part of a scientifically supported joint pilot project funded by the German federal government and the states of Berlin and Brandenburg. The goal is setting up a regional, sustainable hydrogen infrastructure that also includes a hybrid power plant and a tank system. All train operations on the RB27 line are to be carried out with regenerative and regionally produced green energy. By switching from diesel to hydrogen, the project calculated that the Heidekrautbahn will reduce its annual CO₂ emissions by around three million kilos and save 1.1 million litres of diesel.

The RB27 line currently runs from Berlin-Karow to Groß Schönebeck/Schmachtenhagen. Originally, however, the Heidekrautbahn started in Berlin-Wilhelmsruh, but this part of the route was cut off when the Berlin Wall was built. Now this part of the route is being reconstructed. Along with the start of hydrogen operations, the first stage between Basdorf and Wilhelmsruh it is to be operated daily (between 5 a.m. and 11 p.m.) every hour from 2024. The second stage, a continuation of the route beyond Wilhelmsruh to Berlin-Gesundbrunnen, is being pushed ahead as part of the i2030 infrastructure project.