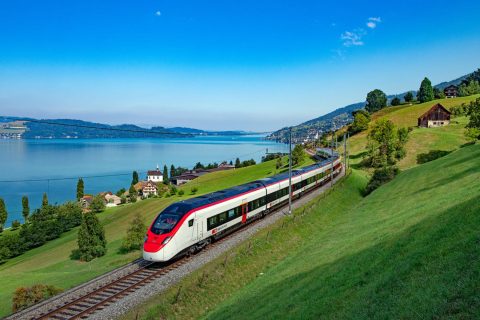 Swiss railway company SBB has inked a deal with Stadler for the purchase of seven additional Giruno trains. The units will be used for SBB’s international services to Germany, as its current Eurocity compositions from the late 1980s no longer meet the speed requirements the company wants to offer on routes to Germany.

SBB has been using the Giruno trains since May 2021, when the first of 29 train sets ordered in 2014 was delivered. The units run from run from Basel and Zurich to Lugano and Milan, as well as onwards to Genoa, Bologna and Venice.

The seven additional trains, a 240-million-euro deal announced on Wednesday, will be used for international services to Germany, which SBB says are steadily becoming more popular in the wake of the COVID-19 pandemic. Passenger number are almost back to levels last seen in 2019.

In a bid to keep expand its service offering, SBB needs trains that can run at 250 kilometres per hour. While it has Astoro trains capable of reaching such speeds, they are already deployed on other high-speed lines. The Gironu for Switserland, which Stadler calls the SMILE high-speed train, is a 202-metre-long unit with eleven cars. It can be expanded to over 400 metres in length for a total of 810 seated passengers. The trains have an entrance system that can accommodate both the 55 centimetre platform height in Switzerland, Austria and Italy, as well as the 76-centimetre-high platforms in Germany.

The first of the seven additional Giruno trains for international services to Germany is slated for delivery in 2026.

Want to know more about international train travel and the efforts the rail sector is making to recover passenger numbers? Join us at RailTech Europe 2022, where these topics will feature prominently. Click here for more information and registration.