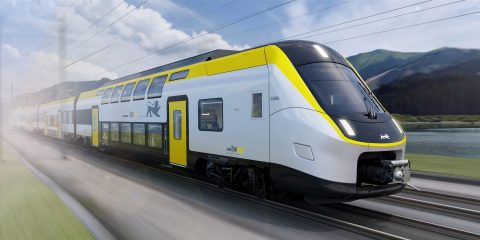 SFBW, the transport company of the German federal state of Baden-Württemberg, has placed an order to the tune of 2,5 billion euros for 130 Coradia Stream High Capacity (HC) electric double-deck trains, Alstom announced on Monday.

The contract also includes maintenance for up to 30 years and an option for another 100 train sets.

The Coradia Stream HC double-deck trains are special in that they will be first the German-built units with a Train Integrity Monitoring System (TIMS) and ETCS Level 3. They will also gradually be readied for the Future Railway Mobile Communication System (FRMCS), the GSM-R successor. Finally, the new double-deckers are equipped with ETCS level 2, and feature the onboard equipment for ATO at GoA2.

The four-car train sets comprise two double-deck control cars and two single-deck cars in the middle. The 106-metre-long trains can accommodate 380 seated passengers and have a top speed of 200 kilometres per hour.