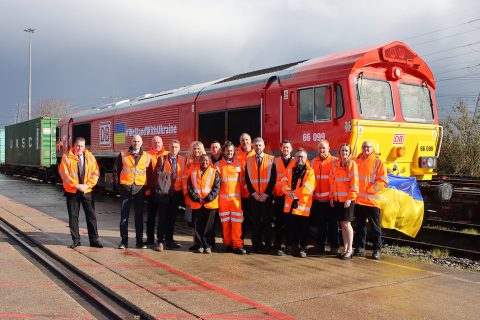 The UK rail industry has come together to send more than one million items of aid to Ukraine in response to the humanitarian crisis. A first aid train has left the UK on a special DB Cargo UK service bound for Ukraine, where it will be received by local organisations.

UK Rail for Ukraine, a cross-industry initiative, was set up by volunteers in early February, and brought together humanitarian aid from across the country.

The train is carrying more than 1,500 tonnes consisting of a range of aid, including non-perishable food, hygiene and medical products, basic living equipment, and other much-needed supplies that have been donated from a wide range of businesses and organisations following requests for aid from the Ukrainian authorities.

Only the beginning of the operation

The logistics operation at the UK origin of the train has been immense, but only the beginning of the operation. The organisers have expressed gratitude for assistance and information provided by both the Ukrainian Logistics Alliance and Department for International Trade in Warsaw.

The collaboration has resulted in a consist of 24 shipping containers marshalled into a 500-metre train. The aid transported by UK Rail for Ukraine has been labelled in multiple languages to assist with distribution when it arrives at its destination. “I am expressing my gratitude to the UK Railway industry and everyone who contributed to the UK Rail for Ukraine initiative”, said His Excellency Ambassador Vadym Prystaiko, Ukraine’s Ambassador to the United Kingdom. “Despite the complexity of the logistic routes, the industry managed to organise a delivery directly to the places of greatest need in Ukraine.”

In addition to the humanitarian aid gathered by volunteers from different businesses and organisations, UK railway operators facilitated the delivery of 21 powerful industrial generators purchased by the Ukrainian Embassy which are imperative for Ukraine’s energy sector. “The UK Rail for Ukraine initiative is playing a great role in delivering humanitarian aid from across the country”, said politician Grant Shapps MP, the UK Secretary of State for Transport. “Our exceptional railway network is working hard to deliver vital supplies to support the inspirational Ukrainian people. The UK continues to stand with all those fleeing Putin’s barbaric invasion.”

Despite the invasion and extensive military operations causing much damage to the national infrastructure, much of the Ukrainian railway network remains operational. “We have all seen the vital role the railway has played in Ukraine, delivering people to safety, and vital supplies to the front line”, said Sir Peter Hendy CBE, the chair of Network Rail. “Britain’s railway is now playing its small part in supporting the inspirational people of Ukraine.”

Noting the part his company had already played in supporting humanitarian efforts on the Continent, Andrea Rossi, the Chief Executive Officer of DB Cargo UK said the UK operation was eager to be involved. “We are pleased to be able to support the ongoing aid effort to deliver essential supplies to ease the suffering of the Ukrainian people impacted and displaced by the atrocities that are unfolding.” David Horne, his counterpart at London North Eastern Railway, spoke on behalf of passenger train operators when he  expressed solidarity behind the initiative. “We are proud to be working alongside the wider railway family in providing support to the people of Ukraine, including our railway colleagues.”

Those colleagues have been working away, unheralded, to bring this first train to the rails. “The initiative shown by the railway industry is truly impressive”, said Trent Smyth, the Executive Director of the senior managers body, The Chief of Staff Association. “We are proud we could play our part in bringing the right people together to help make this possible.”

Symposium Consulting, the London-based agency which has carried a significant share of the organisational effort, has already made clear its position on the invasion of Ukraine. Their managing director, Chris Docker, has spoken about his experiences, and didn’t hesitate to get behind the initiative. “What the UK rail industry has achieved will start to make a real difference to those in Ukraine”, he said. “This could not have been achieved this without remarkable local support. Those individuals have our thanks and my personal commitment to build on this initial momentum.”

Chris and others urged those wishing to make donations to contact the Disaster Emergency Committee Ukraine Humanitarian Appeal. DB Cargo UK said that, at present, further UK Rail for Ukraine services are not scheduled. However, those who may have large quantities of high value physical items to donate are asked to contact Tony Gillan, the International Product Manager at the company. Businesses wishing to offer work to Ukrainians in or outside the country are encouraged to contact the International Chamber of Commerce which is coordinating efforts through their Centre for Entrepreneurship for Ukraine.