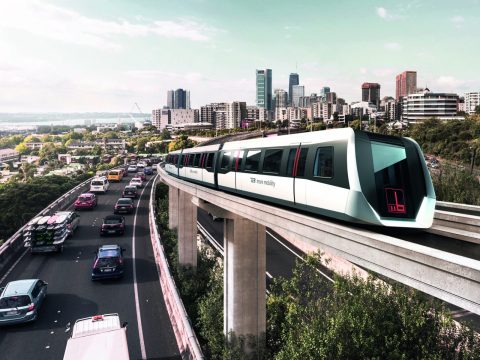 The journey of the Maglev train

The floating Maglev train has a long history, and developing the revolutionary technology does not go as frictionless as the trains float over the tracks. What are some of the most notable Maglev projects in history, and what is the status of Maglev trains today? In this article, Rijkert Knoppers takes a deep dive in the background of magnetic levitation.

In the beginning of January 2022, a prototype Maglev train was rolled out in southwest China’s city of Chengdu, one of the latest developments in magnetic levitation trains. The domestically developed locomotive uses high-temperature superconducting, and will drive with a designed speed of 620 km/h, according to Southwest Jiaotong University, one of the train’s designers. Maglev trains, levitated from the tracks and propelled by powerful magnets to avoid wheel-rail friction, are designed to break the speed bottlenecks facing high-speed trains.

The repelling force of magnets

If you want to make a vehicle float, the repelling force of magnets is an intuitive way. To create the required magnetic field, electromagnets or permanent magnets are for instance attached to the underside of the vehicle. This is a dynamic system: when the magnets installed in the train move along coils of wire arranged on the guideway, electric currents are generated within the coils. These induction currents in turn produce magnetic fields, which repel the magnets in the train. This magnetic flux allows the train to float. A disadvantage of this technology is that the magnetic field is only generated when the vehicle is moving fast enough to produce the required induction current.

You can also attach a curved construction to the underside of the train that more or less embraces the guideway. At both ends of the C-shaped arm there are electromagnets, which exert an attraction on the magnetic material at the bottom of the guideway. An advantage of this electromagnetic suspension approach is that with this technology hovering always works, even when the train is stationary.

The world’s first commercial magnetic levitation transport system was launched in the UK in Birmingham on 16 August 1984. Three fully automatically controlled low-speed trains were in operation, floating at a height of 15 mm and a maximum speed of 42 km/h above the track between Birmingham airport and the nearby intercity station. The six-metre vehicles in question each had six seats and 34 standing places. The weight of the three-metre high vehicles, including passengers, was eight tonnes in total.

However, the transport system suffered several setbacks. For example, one of the companies involved had decided at one point that the bottom of the Maglev vehicle was too weak. This led to the vehicle being reinforced with an extra layer of fibreglass. However, this increased the weight of the already relatively heavy vehicle to such an extent that the electromagnets could no longer keep the train afloat. There was no choice but to build a new vehicle. Another issue was that the conventional speedometers did not work because there was no contact with the concrete guideway.

Between 1989 and 1991, the inhabitants of Berlin could use the M-Bahn, also known as Magnetbahn. The line was 1.6 kilometres long, and there were three stations: Kemperplatz, Bernburger Platz and Gleisdreieck. The floating train operated at a cruising speed of 80 km/h. Originally, the M-Bahn was to start operating in May 1987, but a terrorist attack on 18 April 1987 disrupted the planning. A second attack at Kemperplatz station was foiled by the security service at the last moment.

In the meantime, however, an important event took place, which the initiators of the M-Bahn could hardly have foreseen, and that was the fall of the Berlin Wall on 9 November 1989. This completely changed the local transport concept; it now made much more sense to restore the U-Bahn, which used to run between Gleisdreieck and Potzdamer Platz before the construction of the Wall, so that the route of the M-Bahn could become part of the U2 line. The demolition of the M-Bahn began two months after its official opening in July 1991, and the job was completed in February 1992.

In the Netherlands there were also plans for a Maglev-route between Schiphol airport and Groningen, but the project team decided in 2006 that the construction would be too expensive.

At this moment, six commercial Maglev projects are in operation worldwide: two in South Korea, one in Japan and three in China. It is striking that in five cases these are in fact low-speed floating trains; only in Shanghai does the Maglev reach a high average speed of more than 400 km/h. This while one of the selling points of Maglev is the exceptional high speeds it can achieve.

There are also several Maglev projects worldwide in preparation. In Brazil for instance floats an experimental Maglev train between two university buildings. In the United States there are plans for a Maglev connecting Baltimore and New York, called the Northeast Maglev. In Fenguhuang, China, a low-speed Maglev line is under construction and in Japan a 286-kilometre long route between Tokyo and Nagoya is expected to be finished around the year 2027. In the next decade, Maglev trains could thus gain a more prominent role in the world of transportation.

Rijkert Knoppers studied mechanical engineering at Delft University of Technology and is author of the book ‘Maglev trains, the attraction of levitation’.