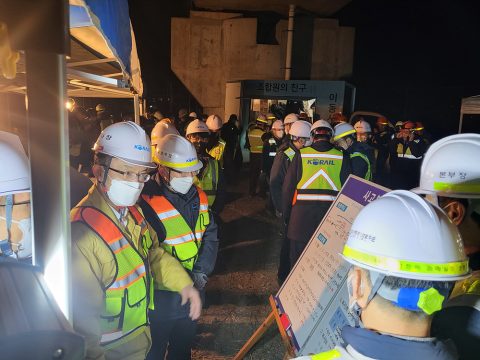 Published on 09-03-2022 at 11:53
Korail president Na Hee-seung, president of KORAIL at the accident recovery site on the night of January 5

The Korean Ministry of Transport has established new measures to prevent high-speed train accidents following the derailment of a KTX high-speed train on January 5. It includes shortening the maintenance cycle of the wheels and strengthening the technical standards of trains to the European standard.

The Korea Train Express (KTX) travelling on the Gyeongbu Express Line from Seoul to Busan derailed due to wheel damage, and seven people suffered minor injuries earlier in January. While the train was running, the wheel was damaged and the axle was disengaged. The train was not completely derailed and one passenger car was slightly off track. Following the incident, train delays up to 4 hours were the result, and the damage to vehicles and the infrastructure amounted to approximately 4 billion won (nearly 3 million euros).

Immediately after the KTX wheel breakage accident, the Ministry of Land, Infrastructure and Transport ordered the Transportation Safety Authority to stop the operation of 13 types of vehicles and replace the wheels based on the inspection results on the maintenance status of driving devices (wheels, axles, and bogies). Accordingly, Korea Railroad (Korail) replaced 432 wheels from 13 January to 26 January. “An accident in which the wheels of a high-speed train are damaged while driving is quite unusual”, said Im Jong-il, director of railway safety policy at the Ministry of Land, Infrastructure and Transport.

In order to establish follow-up measures to prevent the recurrence of accidents, a team of 48 people including operator Korail and experts was formed to establish new countermeasures. The safety management measures are threefold, the first being to enhance the maintenance technology and strengthen record management. Current ultrasonic flaw detection equipment only allows one-way flaw detection, so there was a blind spot in detecting cracks. Therefore, the maintenance efficiency is strengthened by replacing it with a three-dimensional flaw detection equipment that can detect cracks in all directions.

Until now, only the judgment results according to vehicle maintenance were registered in the Korea Railroad Corporation System KOVIS, and the records of the judgment (photos, videos, etc.) were not registered. It will now be mandatory to register the original data such as inspection photos and data log files in the system.

Second, more collaboration between the vehicle manufacturer and maintenance should be established. Korail is reviewing a way for manufacturers to participate through a ‘technical cooperation on maintenance agreement’ with the train manufacturer.

And lastly, the vehicle manufacturing standards should be strengthen to the European level, writes the Transport Ministry. This would include a full-scale implementation of the track driving test, which was only conducted for new types of manufacturing standards for driving devices (wheels, axles, and bogie). Except for the driving system, the rest of the standards are planned to be advanced according to the TSI standards, the European Technical Specifications for Interoperability .

As part of a rapid response plan in case of emergency, a rapid response team that can establish an emergency operation plan within 2 to 3 hours will be established,  which will also inform passengers of the plan. This will be done via a mobile app, but also the number of electronic boards that display delays at train stations will be increased to 24, doubled from the current 12. According to the Korean Ministry, the measures will be completed within this year in cooperation with the high-speed rail operators (Korea Railroad Corporation and SR).