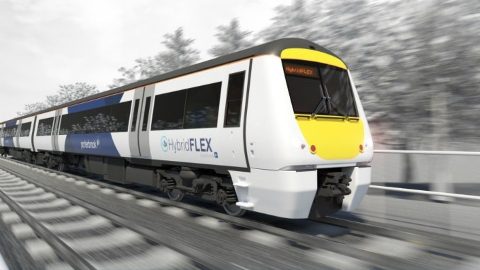 British rolling stock company Porterbrook and Rolls-Royce have signed a Memorandum of Understanding on the use of synthetic and net-zero fuels, including hydrogen, both in fuel cells and internal combustion engines. The MoU will see the companies continue their cooperation, having previously developed the HybridFLEX battery-diesel train.

The agreement also targets the role of the wider rail ecosystem in decarbonisation, including fuel chain supply, infrastructure and operational models that can aid innovation and the transition to net zero.

The two companies developed the HybridFLEX train, fitted with a Hybrid Powerpack for rail use developed by Rolls-Royce. This train recently entered commercial service in the UK with Chiltern Railways. Before, Chiltern was an all-diesel operator with an average fleet age of 25 years. According to the companies, the hybrid train reduces CO2 emissions by up to 25 per cent.

The British Government’s goal is to remove all diesel-only trains from the network by 2040 and achieve a ‘net zero’ rail network by 2050. A number of different routes to this target include alternative forms of power such as hydrogen, fuel cells, batteries, hybrid-electric and sustainable fuels.