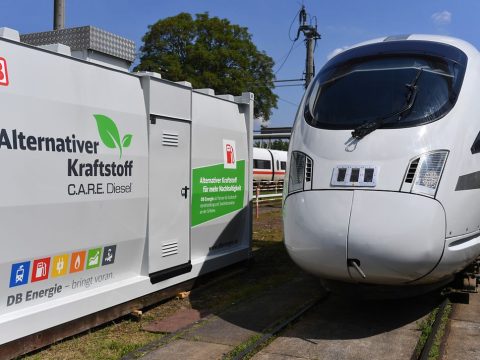 Deutsche Bahn has brought forward its target date for climate neutrality to 2040, a full decade sooner than previously envisioned. The plans include 100-percent green electricity for factories, office buildings and train stations from 2025 onwards, as well as phasing out regular diesel fuel in local and regional transport.

Deutsche Bahn (DB)  already uses solar power from the Gaarz solar power station, but has also secured hydro power and wind energy from 2023 and 2024 onwards, respectively, in an effort to phase out the use of fossil fuels.

With its climate initiatives DB will stay ahead of the German federal government’s own target date of 2045. The railway company’s plans include the activities of logistics subsidiary DB Schenker.

In 2038, the entirety of DB’s trains, including regional units and freight trains, will make use of green energy. Germany’s long-distance trains have been running on energy from renewable sources since 2018.

In the meantime, the first of DB’s fleet of some 3.000 diesel locomotives will switch to alternative fuels this year. Other diesel trains, too, will be switched over to the eco-diesel fuel that the company has been testing with since the summer of 2000. It will mostly be regional trains that will make the transition top eco-diesel.