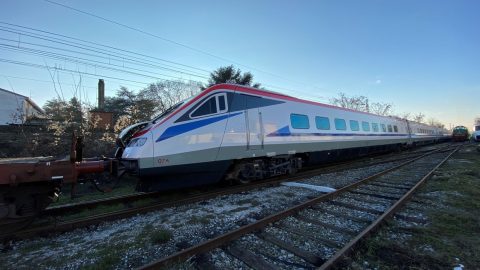 Facing delays in the approval process, the Pendolino high-speed trains for the Athens-Thessaloniki route in Greece are still not on the rails, nearly a year after the scheduled start.

The first high-speed train in Greece was originally scheduled to begin service in March 2021 on the Athens-Thessaloniki route. This week, rail operator TrainOSE announced that the fourth train out of five is on its way to Greece from Italy.

The first of the rains arrived in Greece in January last year, but has been standing still since that time. When it does go into operation, the journey from Athens to Thessaloniki will last 3 hours and 15 minutes.

The Avelia Pendolino ETR 470 high-speed trains, built by Alstom, previously operated in Italy under the name ‘Frecciabianca’ (White Arrow). They have been refurbished by Alstom, and fitted with train control system ETCS. TrainOSE, the main rail operator in Greece (owned by Ferrovie dello Stato Italiane since 2017), will operate the trains.

The Hellenic Railway Regulatory Authority (RAS) has yet to certify the trains, a requirement before the new train goes into operation. In November last year, the authority accepted the proposal of Trenitalia for a new extension of the deadline for the completion of the evaluation of the Pendolino train.

Sand into the works

It is not the first time an extension  is the case in the approval process. The purpose of the first extension time, which ended on 27 September 2021, was to provide the required additional information on the solution of various problematic points. The dominant issue was the lack of a sandblasting system in the trains, which would need to be installed. Sandblasters are attached to the underside of the train and can be activated in a certain situation. Sand is then released to increase grip, so that the train can move with moisture, frost or heavy snowfall on the tracks, especially in sloping parts of the net.

The evaluation was suspended, with a new deadline for november 2021. Although in the intervening period additional documents were submitted on the problem areas, the issue of the lacking sandblasting system still remained. Therefore, the Regulatory Authority raised a legitimate doubt under the applicable provisions of national law.

Trenitalia submitted a request for a new extension for the installation of sandblasting and the submission of all required updated supporting documents with a deadline December 31st, but it was proposed by the RAS to grant an extension until the first of March 2022, anticipating more time is required.