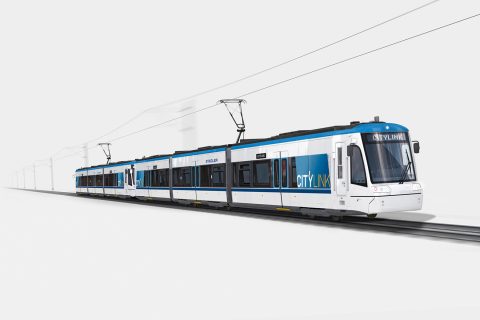 Stadler will deliver up to 504 trams for a total value of 4 billion euros to a German-Austrian consortium comprising six transportation companies. The contract includes a fixed order of 246 Citylink vehicles, valued at 1,7 billion euros.

Under the agreement, Stadler will also perform maintenance activities for a duration of up to 32 years. The contract includes an option for another 258 Citylink units, which, depending on the configuration, can be utilised as tram or train.

Verkehrsbetriebe Karlsruhe (VBK), the Albtal-Verkehrs-Gesellschaft (AVG), Saarbahn, Schiene Oberösterreich, the State of Salzburg and Zweckverband Regional-Stadtbahn Neckar-Alb will make use of the Stadler trams. Saarbahn, which is responsible for the network in and around the Germany city of Sarrebruck, will take delivery of the first four trams in 2024.

The transportation companies will each configure the Citylink trams to their own needs. For example, AVG will opt for a toilet and bicycle racks while Schiene Oberösterreich wants luggage racks.

“On the project team, we spent hours developing a common set of specifications. We defined a standard with up to five further versions to meet the operator-specific requirements such as boarding height, coating and place of use,” overall project manager Thorsten Erlenkötter from Verkehrsbetriebe Karlsruhe says.

To the centre without changing trains

According to the German-Austrian consortium, their procurement concept is the only one of its kind in the world. “The six operators are united by their belief in the concept of tram-trains that can link large cities with their respective regions according to the Karlsruhe model and that can bring people directly into the centre quickly without having to change trains”, Christian Höglmeier, technical managing director of Verkehrsbetriebe Karlsruhe, explains. The Karlsruhe transportation company is the entity responsible for the implementation of the contract.