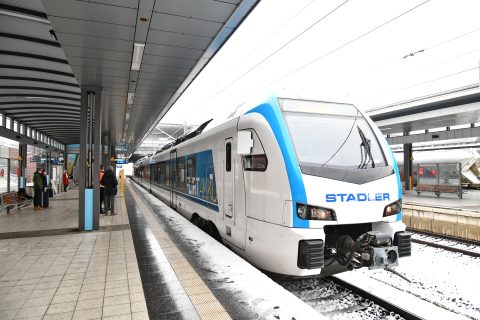 A three-unit FLIRT Akku train has set a Guinness Book of World Record-worthy record by covering a distance of 224 kilometres in battery-only mode.

Travelling in sub-optimal conditions from Berlin to Warnemünde, Stadler was able to confirm the long-held belief that the FLIRT Akku would be able go farther on a single charge than the 80 kilometres guaranteed by the company.

“We designed and calculated the vehicle for an operational range of 80 kilometres, depending on the route requirements of the respective network. But on various journeys testing the technology, we were able to realise significantly greater ranges, so that we even dared to attempt the world record at wintry temperatures”, said technical project leader Evelyn Thiel.

The journey was planned in snowy conditions and at near-freezing temperatures, conditions not well suited to battery-electric vehicles, such as cars, trucks and trains.

“We are very proud to be the official holder of the world record for travelling the longest route in battery-only mode with a regional train now”, Ansgar Brockmeyer, executive vice-president marketing and sales, as well Deputy CEO of Stadler, added. Independent technical consultants from TÜV Nord were on board during the attempt, confirming the distance covered in battery-only mode.