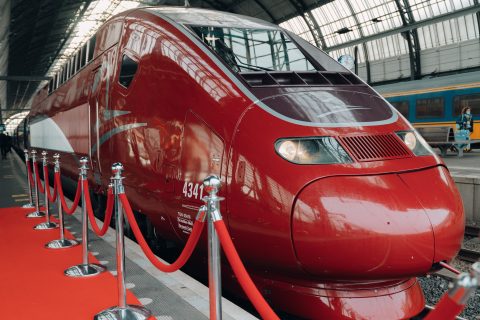 Thalys presented its newly designed train in Amsterdam and various other stations in the Netherlands and Belgium on Tuesday. The train offers 28 extra seats, 15 percent more luggage space, room for bikes and a new bar area. RailTech travelled in the renewed train to Brussels and talked to Thalys CEO Bertrand Gosselin and NS International director Heike Luiten.

On Tuesday morning around 10:00 a.m., a large number of people gathered at Amsterdam Central Station. Media, but also customers, partners and train lovers, have been invited to the festive inauguration of the renewed Thalys train. The new Thalys set off for Brussels at 10.15 a.m., because trains must, of course, run punctually according to the timetable.

The French company that operates trains between Amsterdam and Paris is responding to the social trend of sustainability with its renovations. Since 2020, the trains have run entirely on green energy. They are equipped with LED lights to save on the use of electricity. In the toilets of the new trains, chemicals are no longer used.

For the renovation of its trains, Thalys called on the Belgian design agency Yellow Window. The French designer Matail Crasset contributed to the choice of certain colours and elements of the seats and the bar area. The train offers fifteen percent extra luggage space. Two bicycles can also be transported, but they have to be disassembled beforehand. In some of the toilet areas, there is a fold-out commode.

The new kiosk is located in the middle of the train. A chef prepares dishes with mainly vegetables. Four years ago, Thalys made this choice, and it turned out to be a bull’s-eye, because business travellers in particular want to eat healthy on the road. However, during this first journey, luxurious cakes and pastries such as croissants and ‘Berliner’ donuts are distributed. One of the guests commented that the objective of serving mainly healthy food was in stark contrast to the vending machine in the corner of the kiosk. 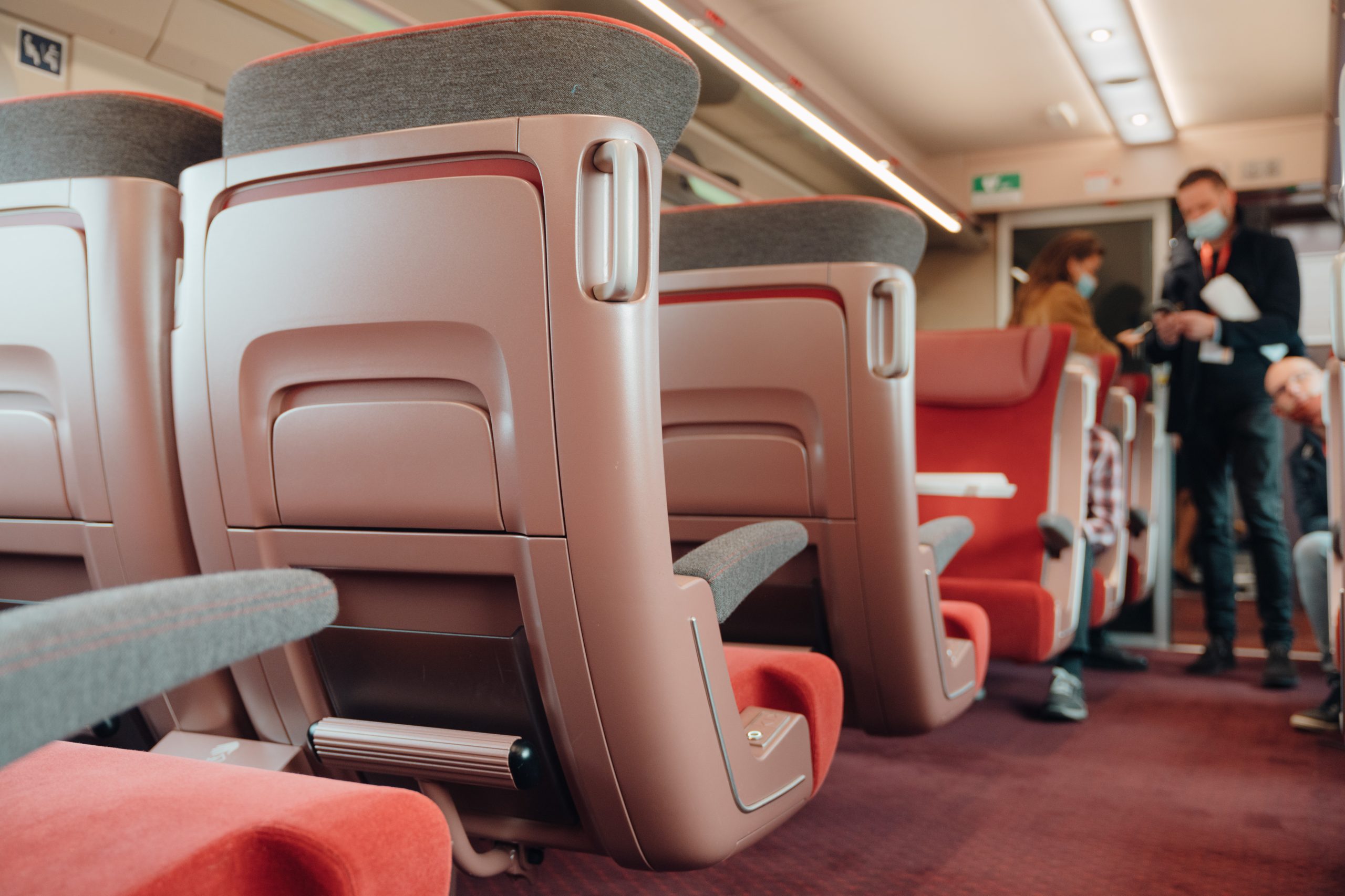 With the new design, Thalys hopes to make train travel more attractive. During the corona crisis, the railway company saw the number of passengers fall by 70 per cent. They want to catch up powerfully, aiming for an 80 per cent increase by 2030, so that passenger numbers are above pre-crisis levels. “We are very ambitious. If we join forces, we can achieve that”, said Bertrand Gosselin, Thalys managing director about the upcoming merger with Eurostar. The aim is mainly to make the trains run more frequently, not so much to serve new destinations.

On the reason why the name Eurostar has been chosen and Thalys will be renamed as well, he says: “That is mainly because Eurostar is better known than Thalys, not only in Europe, but also in America. It is a stronger brand, an umbrella brand.” Some of the trains are red, a nod to the colour of Thalys. 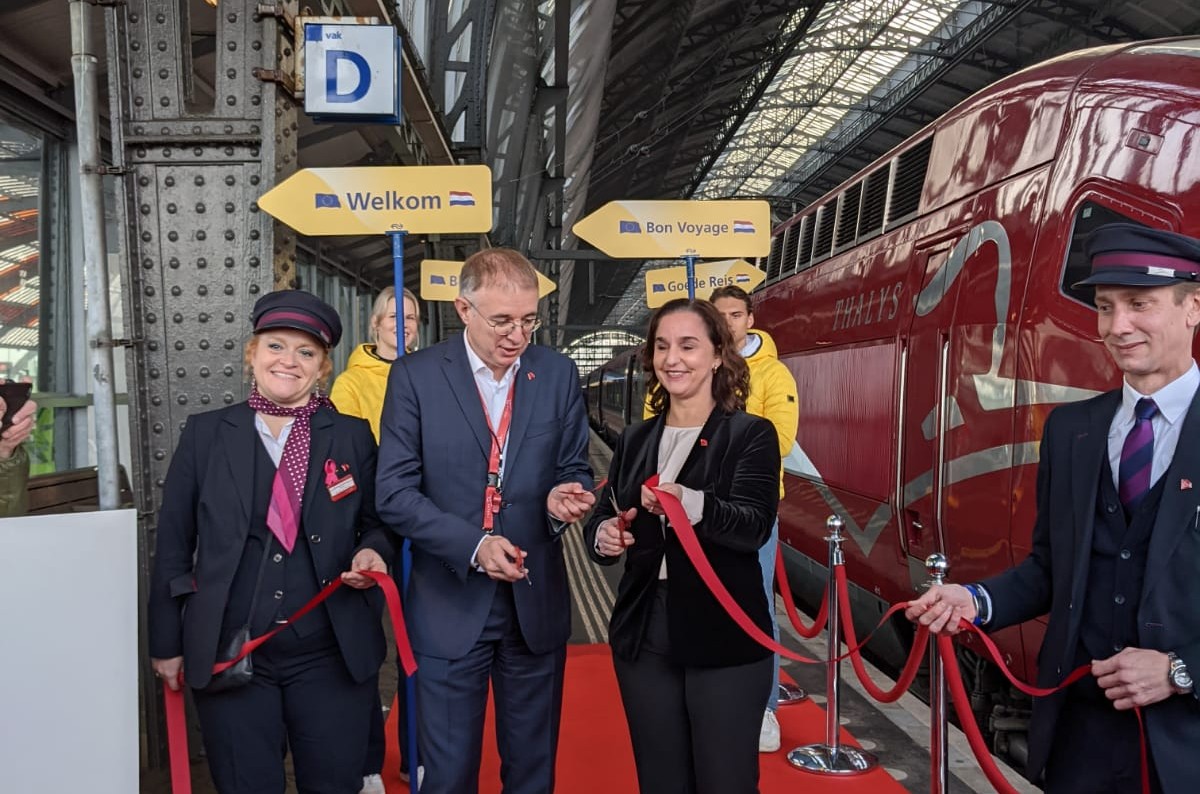 National Dutch operator NS wants to double the number of international trips by 2030 compared to 2018. This was said by Heike Luiten, director of NS International at the festive unveiling of the new Thalys train at Amsterdam Central Station.

The ambition of NS is to double the number of passengers compared to 2018. In that year, there were a total of 7.5 million single journeys per year, and 4 million international passengers. “Achieving this ambition requires more destinations and more capacity”, says Luiten.

“We are still investigating the addition of other new destinations, such as new night train connections. You could think of a night train southwards. A dream in the long run is to go more towards the north of Germany, such as Hamburg.” Improvements can also be added to the current connections, Luiten argues. “The current ICE to Berlin has a very long journey time. We would like to reduce that, as well as to run more trains from Amsterdam to Cologne and Frankfurt.”

As the trains still has the same number of coaches the 28 extra seats just mean: less comfort. Ryan Air on rails……

Only two bikes, and you have to take them apart? They don’t really want any business from cyclists, then!