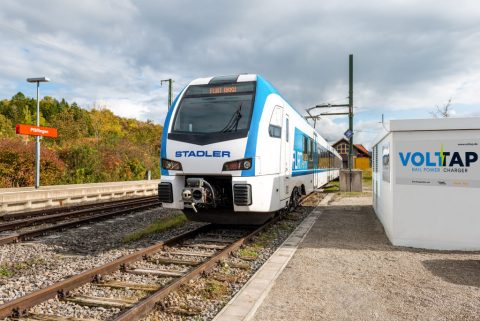 Charging with Voltap takes place without a socket or plug. Although the point of a battery trains is that it can run on non-electrified lines, it is charged via its pantograph at an overhead line system, which together with a transformer station forms the rapid charging station. However, the rest of a line then does not need to have an overhead line to be operated with electric trains.

The Voltap system is similar in concept to charging in use in several countries for electric buses and trams. At the station in Ammerbuch-Pfäffingen in Baden-Württemberg, it was tested to see if the system works with higher voltages.

The technical innovation Voltap is intended to close the gaps in the nationwide rail network that have not yet been electrified and thus pave the way for the widespread use of battery trains. In Germany around 40 percent of the rail network is not electrified.

The quick-charging station can be set up wherever intermediate charging is necessary in order to decisively increase the application possibilities and range of battery trains. Parking in non-electrified sections is also possible with the fast charging station. The trains then use the standing times to recharge for the next day, for example.

The charging station is technically compatible with battery trains of all manufacturers, as long as their on-board electronics are set up for it. As a partner for the real-life tests, Stadler Rail provided a FLIRT Akku train for the test series in Germany. This train is designed as an EMU (Electric Multiple Unit) and additionally equipped with batteries so that it can run both under an overhead line and in battery-only mode where lines are not electrified.

Up to now, the frequency 16.7 hertz has been used for traction current in Germany. However, this frequency is not available outside of electrified lines. The train’s power electronics rectify the AC voltage to charge the batteries. It can do this just as well under 50 hertz as under 16.7 hertz, the tests show. Voltap’s new technical approach enables the system to be fed at 50 hertz from the local power supply – and thus to charge directly without power electronics and the use of additional converters.

During the tests, the developers have carried out all variants of charging processes relevant for practical operation. Decisive parameters had been defined in advance and the test design aligned with them. The most important finding: the interaction between the battery train, the fast-charging station and the ambient power grid works.

The technicians also investigated the effects on the power grid and gained insights into the extent to which so-called ‘interference currents’ occur, how well the train’s internal charging management harmonises and at which battery charge levels the charging currents change.