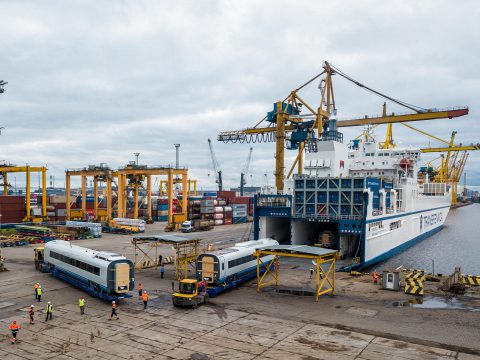 Petrolesport terminal, a Global Ports group company, organised a transhipment of railcars of the new high-speed Sapsan trains. This is the first time these trains have been transhipped in the Big Port of St. Petersburg.

Global Ports noted that special technology was used to handle the complex project cargo, which made it possible to promptly reload the ten railcars from the sea vessel to the railroad track.

The new Sapsan is the first from a new lot of 13 high-speed trains manufactured by Siemens Mobility for Russian Railways. The train arrived at Petrolesport on August 9, 2021 by the regular service of the Transfennica ro-ro shipping line. After unloading from the vessel, the ten railcars were rolled onto the railway track and mechanically coupled into a single train directly in the port.

From Petrolesport, the new Sapsan train will go to the Metallostroy depot, where the railway service will carry out commissioning and a series of tests before launching the trains on the route. The other 12 new high-speed trains are also planned to be transhipped through Petrolesport terminal.

The commissioning of this new lot of trains will almost double the Sapsan fleet in Russia to 29 trains.