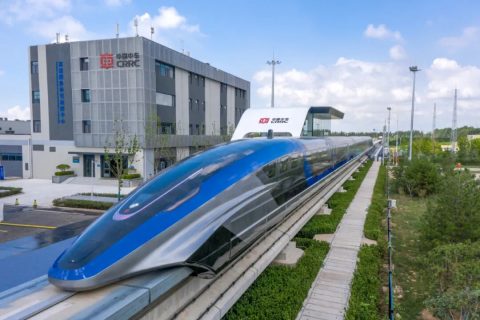 China’s new high-speed maglev train, with a designed top speed of 600 kilometres per hour, rolled off the production line on Tuesday. It is currently the world’s fastest ground vehicle, reported China’s state news agency Xinhua. The train has however not reached this speed yet on any track.

The new maglev transportation system made its public debut in the coastal city of Qingdao, east China’s Shandong Province. It was developed by China and marks the country’s latest scientific and technological achievement in the field of rail transit, according to the China Railway Rolling Stock Corporation (CRRC).

In Japan, the L0 series of JR Central reached the current world record on 21 April 2015 of fastest manned train in the world with 603 kilometres per hour, using the SCMaglev system. The basic principle of Maglev is to use electromagnetic attraction to make the train levitate on the track to realise operation without contact to the rails. In January this year, CRRC unveiled the prototype of a maglev train that could reach 620 kilometres per hour. A 165-metre line to test the prototype maglev was also constructed, on which it can’t reach full speed.

China’s new breakthrough demonstrates that the country has mastered a complete set of high-speed maglev train engineering technologies, said the company. The train is equipped with Automatic Train Operation (ATO) with Grade of Automation 3. This means the train can operate fully automatic, but a train attendant should be on the train. It meets the highest safety level requirement of SIL4.

Each train section can carry more than one hundred passengers, and can be flexibly grouped in the range of 2 to 10 vehicles to meet the needs of different passenger capacities.

Tests within the factory

The high-speed maglev train project was launched in October 2016. The magnetic-levitation train prototype with a designed top speed of 600 kilometres per hour was developed in 2019, and conducted a successful test run in June 2020. According to CRRC, engineers have completed the integration of the maglev transportation system, and a train with five carriages has been running well on a test line within the factory.