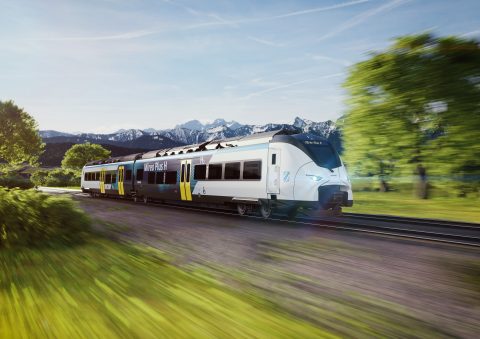 The Bavarian State supports the testing in Bavaria of a hydrogen-powered train developed by Siemens Mobility. A two-car Mireo Plus H train will be tested on the route Augsburg – Füssen in Germany from mid-2023. A Memorandum of Understanding was signed on Monday by Minister for Economic Affairs Hubert Aiwanger, Minister for Transport Kerstin Schreyer, and top representatives of Siemens Mobility and Bayerische Regiobahn (BRB).

The pilot operation on the rail network of Bayerische Regiobahn (BRB) is initially planned for 30 months. The hydrogen-powered train will be stationed in Augsburg during this time. The train is another important component in Bavaria’s hydrogen strategy, according to Minister of Economic Affairs Hubert Aiwanger. “We’ll prove in Bavaria that business and climate protection can be reconciled with green hydrogen.”

“We agreed to test hydrogen technology and to test the Siemens Mobility train in passenger service because we are curious and open to alternative forms of propulsion in the railway sector as well”, said Arnulf Schuchmann, technical Managing Director of Bayerische Regiobahn. “Many aspects have to be taken into account during operation. Safety requirements have to be implemented, staff training, the refueling of the vehicle, the routes on which it will travel, and many other activities have already begun”.

The hydrogen-powered train is being developed on the basis of the Mireo Plus H platform from Siemens Mobility. It is designed to operate on non-electrified rail lines and has a range of up to 800 kilometers. The main components of the hydrogen traction drive are two fuel cells mounted on the roof.

The system uses the latest generation of batteries from the Saft company that are installed beneath the floor. The train will be presented to the public in the spring of 2022. The first test runs in Bavaria are planned for 2023, before the train officially enters passenger service in January 2024.

Germany’s state operator Deutsche Bahn recently announced it is developing rapid refueling for hydrogen trains. The same Mireo Plus H trains from Siemens will start a one-year trial operation with DB on the rail between Tübingen, Horb am Neckar and Pforzheim in 2024.

In the state Brandenburg, regional operator Niederbarnimer Eisenbahn (NEB) has secured government funding of around nine million euros for the acquisition of six hydrogen fuel cell trains. These are to be used on the regional train line RB27 from December 2024. Called the Heidekrautbahn, this line connects the outskirts with the city of Berlin.