Deutsche Bahn will develop a new type of mobile filling station for hydrogen trains, which will fuel trains within 15 minutes. Following tests in the coming weeks, it will be built in autumn, and should go into operation in the summer 2022. The mobile system is part of a larger project consisting of a new train and maintenance facility in Baden-Württemberg.

Deutsche Bahn is building the necessary infrastructure for when they will deploy hydrogen trains. DB Group recently brought forward its goal of climate neutrality from 2050 to 2040, of which greener fuels are an important aspect.

It will be the first hydrogen filling station of Deutsche Bahn. Currently in Germany, there are two filling stations for trains being built with Alstom involved: the first near Bremervörde in Lower Saxony for regional operator LNVG, and one in Hesse for transport association RMV. However, Deutsche Bahn is developing a new type with faster refueling.

A challenge: under 15 minutes

The new DB hydrogen filling station for rail was designed in the past six months. Its core element, a new type of rapid refueling, will be tested in a laboratory environment starting next week. For several weeks, these tests will lay the basis for the initial approval and construction of the new system. The aim is to start assembly of the hydrogen filling station in autumn, and it should go into operation in the summer of next year.

The first system of this type is a technical challenge, says DB. Fueling within 15 minutes is so far only feasible with conventional diesel fueling. Industrial partners are the Ulm company Wenger Engineering and the family company Wystrach from Weeze on the Lower Rhine. The faster refueling of the future hydrogen trains should benefit the tightly-timed local transport.

DB Energy’s hydrogen filling station will be part of an overall system, centering around a new local train, the Mireo plus H, that is newly being constructed by project partner Siemens Mobility. Additionally, a maintenance facility from DB Regio that has been made fit for hydrogen trains. The green hydrogen, from renewable sources, is produced directly at the location of the new local train.

Head of DB Energy Torsten Schein: “Hydrogen generated with green electricity as an alternative to diesel is paving the way for climate neutrality. Green hydrogen can be a success in rail transport if fast, reliable and competitive refueling times with conventional diesel systems are possible. This filling station infrastructure is of crucial importance: It is an innovation and will set standards.”

The filling station, consisting of storage, gas and pump technology, cooling and compression for hydrogen, is designed to be mobile in order to be able to quickly advance further hydrogen projects on the railways. The joint funding project is called H2goesRail, and has been running since 2020. It will begin its one-year trial operation on the rail in the state Baden-Württemberg between Tübingen, Horb am Neckar and Pforzheim in 2024. 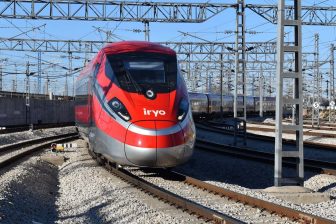 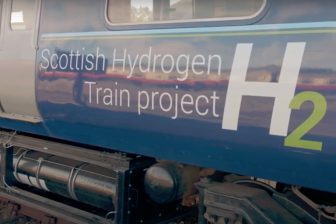