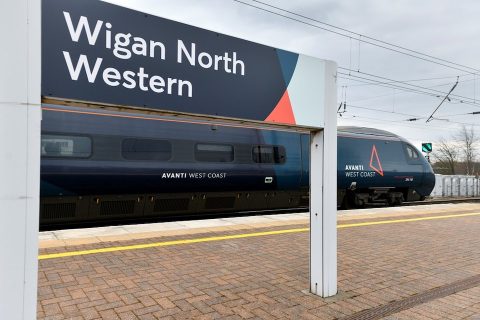 An attempt to break a 37-year old speed record on Europe’s busiest mixed-traffic route has failed, by just 21 seconds, on a journey lasting almost four hours. Passenger operator Avanti West Coast, with cooperation from the infrastructure agency Network Rail and other operators, attempted a non-stop run between London Euston and Glasgow Central in an effort to beat the 1984 speed record for the journey. An unforeseen temporary speed restriction just a few miles from the final destination put paid to the attempt, with the train pulling to a halt just 21 seconds outside the record.

Avanti West Coast, which operates a fleet of Italian-built Pendolino tilting trains, was unable to break a speed record set by a British-designed prototype, back in 1984. The Advanced Passenger Train (APT) set a new standard for the run between Glasgow and London, clinching a buffer-to-buffer time of 3 hours, 52 minutes and 40 seconds, almost 103 mph (165 kph) average speed. Thursday’s attempt left some retired British engineers rather proudly toasting their efforts from four decades ago, with the continental cousin of their brainchild falling short by the tiniest of margins.

Back in the 1970s and 1980s, British Rail Engineering, as it was then called, developed some remarkable trains. They boosted the appeal of the railways, which were fast moving into the slow lane, behind an ever improving motorway network and the advent of cheaper and cheaper domestic flying. Their most outstanding success was the High Speed Train (HST) which remains the fastest diesel train in the world, and examples of which are still in service today.

The other big project with a small budget was a train capable of competing with the airlines on the London to Glasgow West Coast route. However, the challenges of speeding up the notoriously twisty West Coast Main Line were prohibitively expensive – and still are – which is part of the reason for the building of HS2. The solution was a whole new technology of ‘tilting trains’ which rode the sharp curves like a speed skater or a racing motorcyclist. The good news for passengers would be no need for sharp blades nor crash helmets.

Fraction of the budget

The Advanced Passenger Train was as far ahead of the market on rails as Concorde had been in the air – but it was developed with about one per cent of the budget afforded to the Anglo-French supersonic airliner. Consequently, the APT never moved beyond a handful of prototypes, and the trio of sets that were put into service suffered teething problems that saw its tilt mechanism fail.

However, in a proof of concept run, the APT did show what it was capable of achieving. On a cold December morning in 1984, the prototype set scorched up the West Coast Main Line, shattering the record for the run between London and Glasgow.

That however, was the end for the APT, which now resides at the National Railway Musuem in York – alongside Mallard, the fastest steam locomotive in the world – a record set in earlier times on the rival East Coast Main Line.

No overseas manufacturer sought to take on the engineering advances represented by Mallard, but there has been much interest in the tilting technology of the APT. It is with some irony, that the fleet of Italian built tilting trains, developed by Fiat Ferroviaria and built by Alstom, are now the mainstay of WCML services. It is perhaps to the chagrin of British Rail Engineering veterans that variants of the design run in around ten networks around the globe.

Thursday’s record attempt therefore was something of a coming of age for the WCML, and a passing of the baton from the parent to child. However, it didn’t quite work out that way. Avanti had staged the record attempt with all the meticulous planning and secrecy attributed to Mallard’s 1937 race across the flat plains of Lincolnshire and Yorkshire.

The collaboration of other operators had been sought. This is after all the busiest mixed-use line in Europe, and the run was due to leave London in the mid-morning. A VIP only guest list was aboard, stopwatches at the ready. As the train blasted through Watford, Crewe and Carlisle and even mounted Beattock Summit at a steady climb, hopes were as high as the Scottish mountains all around. Then, the heartache.

Despite all the advantages and advances of 37 years, a temporary speed restriction with Glasgow almost in sight leaf not enough time to hammer through Motherwell, Cambuslang and the southern suburbs. As the train crossed the River Clyde, already nosing on to the longest platforms at Glasgow Central, the clock ticked agonisingly over the mark, and the brakes were applied 3 hours, 54 minutes and one second after leaving Euston.

The Advanced Passenger Train – so mercilessly maligned in its day, still remains the pride of the West Coast Main Line. If any of those veteran APT engineers had any influence on the temporary works in South Lanarkshire, they are certainly not sharing the knowledge with anyone at Avanti – or anywhere else for that matter.

When APT was cancelled British Rail sold the patents for the world’s first active tilt train mechanism to Fiat Ferroviaria which built the Pendolino trains in Italy so the Avanti West Coast trains use adapted from APT tilt technology.

How interesting that after 37 years the record still stands. The APT has certainly proved itself, and is the forefather of Pendolino, according to Jason Leahy´s comment, which I was not previously aware of. It is a shame that we do not have the confidence to do things ourselves rather than believing that there are others in different countries who can do things better. There are so many examples where similar things have happened in other industries including aerospace and auto engineering.

This is worth looking at for lessons learned.