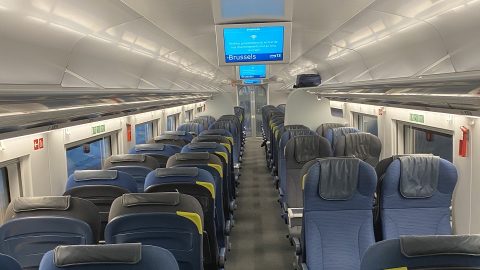 COLUMN – The economic viability of night trains will be insecure if no action is taken on the track access charges. The struggle of Eurostar to keep its head above water showed that high track access charges can get in the way of keeping trains running, writes Arriën Kruyt, Member of the Management Board of the European Passengers Federation, in his first monthly column for RailTech.

Policymakers on the European and national level would like to increase the numbers of passengers in international trains and to reduce the numbers of passengers on short-distance flights. The reason is that planes are bad for the environment and airports are more and more considered as problematic. If the policymakers really want to achieve their goals, they should look as well to the barriers for international trains.

One of the barriers are the track access charges. Before the opening of the market for rail, this was not an issue at all. The national railway companies owned the infrastructure and they did run the passengers and freight trains. Bilateral and multilateral agreements regulated the costs and incomes for international trains.

Market opening changed all that. The governments requested the rail infra structure management to earn money to cover part of their costs. These governmental requests have led to track access charges which the railway companies have to pay. This is a burden for all railway undertakings but it is a barrier for international trains.

The first visible victim was the highly popular car sleeper train from ‘s Hertogenbosch to Avignon which had to pay track access charges in the Netherlands, Belgium, Luxembourg and France. When the charges suddenly went up in France the last company who had run that very popular service had to stop its business in 2015. A less visible victim is the EU theory that there is a free market for international trains. In reality, there are only a very few small examples.

The recent publicity on the financial difficulties of Eurostar has brought to light that Eurostar has to pay access charges on the High-Speed Line 1 from London to the Channel tunnel, to the owner of the Channel Tunnel and to the infrastructure managers of France, Belgium and Netherlands to run a train from London to Amsterdam.

There is no doubt at all that despite Brexit there is a market for trains between London and Amsterdam after covid-19. But if the costs are too high, it will be very difficult to run the trains. The effect will be more flights between Amsterdam and London.

All over Europe, we see initiatives for new night train services. Many politicians applaud and encourage these initiatives. Bu the economic viability of these initiatives is doubtful if nothing is done on the issue of track access charges. The same can be said of the political wish to move goods from the roads to the rails. This is not going to happen unless politicians do something concrete.

The best solution would be to treat railways like roads or canals. Roads, ports and canals are considered as necessary investments for the economy but the lorry or ship companies are not supposed to pay for the costs.

I would add that if the railways went into contractual mode in the 1990s, it was because the States no longer wanted to pay the deficit of foreign trains and had to contain the deficit of national trains with regard to their public finances (Maastricht criteria). International traffic has never been considered an essential service because it is not used to go to work or school, but rather as leisure traffic. That is why these trains are considered as “commercial”.

@Frédéric: “International traffic has never been considered an essential service because it is not used to go to work or school, but rather as leisure traffic. That is why these trains are considered as “commercial”.”
That was the initial choice of many governments in the 1990s but in the mean time that has changed in many places, at least for many regional international services, not in the least because these services ARE used to go to work or school.