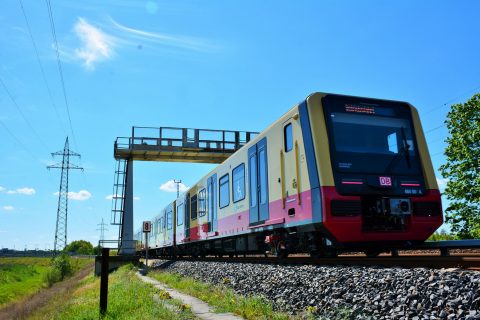 The premiere train serial numbers 484-001 and 483-001 with six cars will roll out of the Schöneweide station on New Year’s Eve. During the day, two more new trains will supplement service on the route between Spindlersfeld and Hermannstrasse.

Quarter and half trains

A total of 106 new S-Bahn trains and thus 382 new S-Bahn cars of the type 483/484 are being built by the consortium of Siemens and Stadler. The 21 quarter trains, which operate under the name BR 483, consist of two fully accessible cars. The 85 half-trains, which operate under the name BR 484, are made up of four continuously accessible cars. They are to be delivered by the end of 2023. In addition to operating on the S47 line, the new trains will also be used on the S46, S8 and S41/S42 lines.

S-Bahn CEO Peter Buchner: “These are the most comfortable trains in the long history of the Berlin S-Bahn. Together with Siemens and Stadler, we have been working towards this moment for five years. We closely accompanied the production, testing and acceptance of the trains and prepared ourselves intensively, including training train drivers and employees in the Grünau workshop on the new trains.”

These trains will provide a stream of further data and experience that can flow into the series production, which has already begun. The new trains will operate on the Ringbahn system based on the new transport contract with the states of Berlin and Brandenburg that takes effect on 1 January 2021.

The pre-series trains have been tested thoroughly in the S-Bahn Berlin network since September 2019, completing around 150,000 test kilometers and operating on every part of the 340-kilometer system. During these months of testing, 114 train drivers were also trained to operate the new series, since the trains use far more advanced technology than the system’s older units.

Jure Mikolčić, CEO of Stadler Germany: “With the new S-Bahn trains, Stadler and Siemens are delivering ultra-modern ‘Made in Berlin’ units that are precisely tailored to the requirements of S-Bahn Berlin and its passengers.  And thanks to their redundant traction system, the trains are far more robust and reliable.”