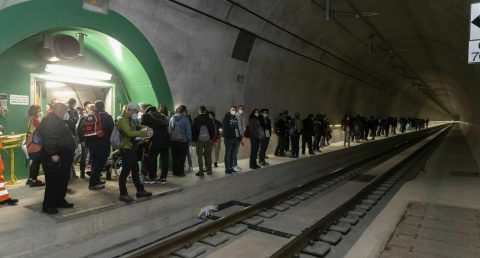 Successful train evacuation exercise in the Ceneri Base Tunnel

Swiss railway operator SBB conducted a rescue exercise in the Ceneri Base Tunnel last weekend. The main focus of the “Sare” rescue exercise and emergency drills was to go over the rescue procedures inside and outside the tunnel, to ensure the safety before operation of the tunnel starts.

The Ceneri Base tunnel, which was finished this September, is a part of the Swiss-Italian Gotthard route. The tunnel is part of the EU Rhine-Alpine TEN-T corridor from Rotterdam to Genoa. The tunnel is not yet in operation, before that SBB has to demonstrate that the processes and procedures developed in the safety plan will work in a real emergency. Around 200 emergency personnel and 300 crisis actors from all over Switzerland and neighbouring countries took part in an evacuation and self-rescue drill in the Ceneri Base Tunnel.

Daniel Schlup is SBB’s exercise manager for the evacuation exercise in the Ceneri Base tunnel. “The rescue exercise went well and without any mishaps. This is very important for us. SBB was able to prove that, in the event of an incident, the procedures of the Ceneri Base Tunnel’s alarm and rescue concept work not only in theory but also in practice. The requirements have been met and mixed operation of long-distance, regional, and freight traffic can start as planned on Monday, 12. October 2020.”

The rescue exercise was originally planned for June, says Schlup. Due to the coronavirus pandemic the exercise had to be postponed and then rescheduled entirely. Also a coronavirus protection plan was made to carry out the operation safely. “Protective measures included the general requirement to wear a mask during the entire exercise, keeping a safe distance and other hygiene requirements, as well as checking for fever at the check-in.”

To ensure a safe evacuation out of the tunnel, cooperation between internal and external emergency services is crucial. Rescue times can only be met when all the processes are functioning smoothly. The communications between the train-control centre in Pollegio and the rescue services in the canton of Ticino, the speaker announcements in the train, and the signage in the tunnel are also tested as part of the operation.

Another tunnel in the Rhine-Alpine corridor, the Gotthard base tunnel also was subjected to an evacuation exercise before railway operations started. When it comes to emergency situations, several things are different in the Ceneri Base tunnel, Schlup explains. “Unlike the Gotthard Base Tunnel, unaccompanied TILO trains will be used for regional services in the Ceneri base tunnel. For this reason, the safety plan provides for self-rescue procedures. Unaccompanied regional trains do not have a train manager to guide or lead the passengers. The passengers have to follow the instructions provided by the train announcements and on the signs in the tunnel, and get to the nearest safe area themselves.”