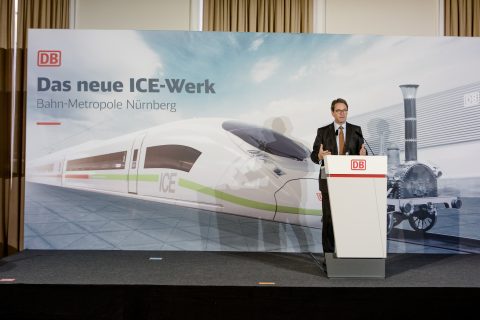 There are plans for a new facility in the German city of Nuremberg for the maintenance of ICE trains. Deutsche Bahn invests 400 million in the maintenance facility, and creates 450 new jobs with the project. The workshop, which should go into operation in 2028, will serve as a pitstop for 25 ICE trains per day.

German rail operator Deutsche Bahn (DB) is expanding its fleet of long-distance trains significantly in the upcoming years. With the construction of a large maintenance facility for ICEs, DB aims to meet the growing demand for rail on the long term. DB calls the new facility in Nuremberg is an important milestone.

Central in the facility is a 450 meter long maintenance hall, where up to 25 ICE trains per day can be maintained on six tracks. The approval for the plant is currently being processed. The maintenance facility is scheduled to be completed in 2028.

Berthold Huber, DB Board Member Passenger Transport explains: “For the expansion and modernization of its long-haul fleet alone, DB is investing a record amount of 8.5 billion euros by 2026, including a total of 167 new ICE 3 and 4 trains. Today we must set the course for the growth and maintenance of tomorrow’s fleet.”

The new ICE plant in Nuremberg will be operated 100 percent CO2 neutral. The Cologne-Nippes plant, which opened in 2018, is like a blueprint for the new sister plant in Nuremberg. The technologies tried and tested there, such as the use of solar thermal energy for heating and hot water and a specially insulated building layer, will also be used in Nuremberg.

The Franconian metropole of Nuremberg has a long history with rail. The city has recently become even more important as a railway junction, partly with the opening of the high-speed connection Munich-Berlin in 2017. Europe’s north-south and east-west rail corridors also intersect in Nuremberg.

There are already several Deutsche Bahn factories in Nuremberg, with a total of more than 5000 DB employees. DB strengthens the location with the new ICE workshop. Ronald Pofalla, Director of DB Infrastructure: “Nuremberg is a central hub in our network and therefore an ideal location for our new maintenance facility. We are creating 450 attractive jobs here and local companies can participate in tenders for the construction of the facility. This way, we strengthen the economic power of the entire region.”