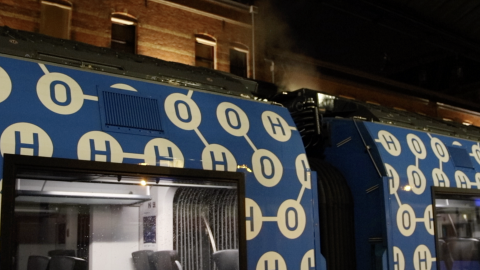 Global engineering company Linde will construct the world’s first motionless filling station for hydrogen trains. It will appear close to Bremervörde railway station in the German state of Lower Saxony. The filling station will be launched in mid-2021.

Germany is moving further towards introducing hydrogen-powered trains into scheduled service. The first major achievement was set in a period from September 2018 to February 2020. During this stretch of time, Alstom successfully tested two Coradia iLint multiple units, the world’s first hydrogen trains, on the regional non-electrified routes in Lower Saxony. In mid-2021, there will be set another watershed when Linde, the global Germany-originated engineering and gas industry company, will complete the construction of the first motionless filling station for hydrogen trains. It is worth to remind that Alstom used the mobile filling station during the trials of the Coradia iLint trains.

A symbolic groundbreaking ceremony took place on Tuesday, 28 July, in Bremervörde, while the start of the actual construction work is scheduled for September. Linde will perform the project on behalf of the Lower Saxony Regional Transport Company (LNVG). Among other participants are Alstom, as the train manufacturer, and Eisenbahnen und Verkehrsbetriebe Elbe-Weser (EVB), as the future operator of the hydrogen vehicles and the planned filling station. The project is subsidised within the German national innovation programme for hydrogen and fuel cell technology of the Federal Ministry of Transport.

“The construction of the hydrogen filling station in Bremervörde will create the basis for the series operation of our emission-free hydrogen trains in the Weser-Elbe network. We really appreciate that Linde, as an experienced hydrogen supplier, is now also taking over the refuelling of the series trains following the successful trial operation,” said Jörg Nikutta, Alstom’s Managing Director for Germany and Austria. The regular traffic of the Coradia iLint hydrogen trains will start in Lower Saxony from the end of 2022. To this end, EVB purchased 14 vehicles.

The German states of Lower Saxony, North Rhine-Westphalia, Baden-Württemberg and the Hessian transport association Rhein-Main-Verkehrsverbund signed letters of intent with Alstom for 60 hydrogen trains. In addition, Alstom is planning to develop the hydrogen multiple units for Italy and the United Kingdom.