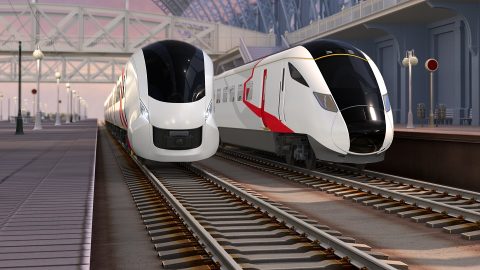 Over 400 battery trains could be introduced in UK

Two-thirds of the UK’s railway network is non-electrified. This creates great promise and demand for battery-powered trains. Hitachi Rail has estimated the potential of the British market at the level of more than 400 vehicles of this type.

Of this number, Hitachi Rail could equip 275 trains, both intercity and metro, with battery packs in the coming years. To achieve this goal, the rolling stock manufacturer has joined forces with Hyperdrive Innovation, the British manufacturer of batteries for various industries. “The partnership with Hyperdrive creates the shovel-ready opportunity for new battery trains to be ordered now. As well as new trains, this is also a window of opportunity to cut carbon and supercharge a green recovery in the North East and across the UK,” said Andrew Barr, Group CEO at Hitachi Rail

According to the Memorandum of Understanding, Hitachi Rail and Hyperdrive Innovation will jointly develop a battery pack that can be installed and power a battery train. The cooperation between the two companies will be fruitful as their manufacturing facilities are located close to each other. Hyperdrive’s battery site is situated in Sunderland, Tyne and Wear County, while Hitachi’s train-building factory is in Newton Aycliffe, County Durham. Therefore, both facilities are located just 32 kilometres from each other. It is very convenient for a supply chain and a manufacturing process.

Hitachi has already developed its own battery-powered train for the Japanese rail market. It is known as the BEC819 series or DENCHA. Hitachi’s battery trains of this type were introduced on the Japanese railway network in October 2016. 18 two-carriage trainsets were built with installed batteries. They are running with a wire-free range of 50 kilometres on the Fukuhoku Yutaka Line and Chikuhō Main Line on the island of Kyushu. In 2007, Hitachi Rail also fitted a hybrid test train – known as a Class 43 HST – with batteries and ran over 100,000 kilometres.

In general, the rolling stock manufacturer positively estimates the prospectives of the battery technology for the rail sector, even compared to other innovative solutions. “Cost and weight reduction of batteries continues to accelerate, while power density increases. The ease of integration on trains means the range and recharging of battery trains will only improve and meet the demands of different profiles of rail journeys. At the moment, battery trains have approximately 50 per cent lower lifecycle costs than hydrogen trains, making battery the cheapest and cleanest alternative zero-emission traction solution for trains,” the company stated.