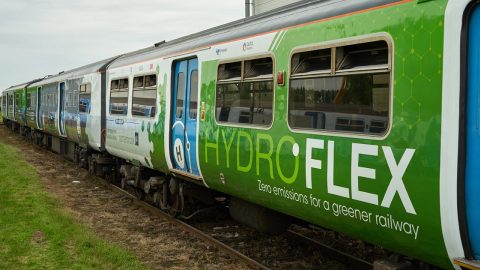 The Railway Industry Association (RIA), an alliance of British rail suppliers, has called on the government to support and invest in hydrogen trains as a viable option for the country’s network. The trade group also provided three reasons why hydrogen-powered trains are a plausible solution for the United Kingdom.

In its response to an All Party Parliamentary Group on Hydrogen’s inquiry, RIA has appealed to the government to invest in hydrogen trains as an important component of the green recovery and zero-emission transport. “Now is the time for the UK Government to support all modes of clean train traction, including hydrogen-fuelled train fleets, in order to stimulate the UK market, provide low carbon rail links and deliver economic growth and investment to the economy,” the trade alliance noted in its key ask.

To explain why ‘the hydrogen trains are a viable option for the UK rail network’, RIA defined three key reasons. The first point is about the efficiency of these vehicles compared to conventional diesel trains. “A hydrogen self-powered passenger train is a plausible solution on longer and less intensively used regional routes, with speeds of 100 miles per hour or less, where there is no economic case for electrification. As hydrogen requires approximately eight times the storage volume of diesel for the same range and performance, it is unlikely to be a plausible solution for higher speed or mainline freight trains, both of which require much larger installed power and longer ranges,” RIA specified in its submission to the Parliamentary Group.

The second reason is the contribution of the hydrogen trains to the decarbonisation of the rail sector. “While hydrogen created using renewable electricity would be zero carbon, an analysis of 2018’s grid mix shows hydrogen from electrolysis is only slightly lower (4 per cent) than diesel carbon, and hydrogen from the reformation of natural gas is 24 per cent lower. Therefore, whilst hydrogen has the potential to be low carbon, the decarbonisation of the electricity grid will also be a major factor for achieving this,” the RIA’s letter reads.

And the third reason is related to the economic impact. According to the association, the innovative type of rolling stock could be a powerful stimulus to recover the UK economy after the lockdown. “Rail investment has an important role to play in spurring economic investment. The Government should look to make this recovery a ‘green’ one, by prioritising environmental technology development, such as hydrogen fuel cell use in trains,” RIA added.

The association of the British suppliers also specified that there are 3,000-3,300 diesel trains in the country that will be replaced in the near future. Of these, 2,400 trains could be substituted by hydrogen or battery trains. “This is an opportunity to utilise the large number of trains going off-lease in the coming years, due to a significant number of new trains coming on line,” RIA noted. In its submission to the Parliamentary Group, the association drew attention that the hydrogen trains have been successfully tested in Germany.

As for the UK rail market, there are also some developments in this area. Last year Alstom offered to the British operators a concept of a hydrogen-powered train nicknamed as ‘Breeze’ (look at the picture above). It is based on Class 321 electric multiple units owned by Eversholt Rail. Another example is the HydroFLEX demonstrator developed by Porterbrook and the University of Birmingham’s Centre for Railway Research and Education (BCRRE). It is based on a Class 319 electric unit that was equipped with hydrogen fuel tanks. “The technology already exists, but what is now needed is a commitment to a fleet order,” the Railway Industry Association summed up.

Read about hydrogen trains in Europe: