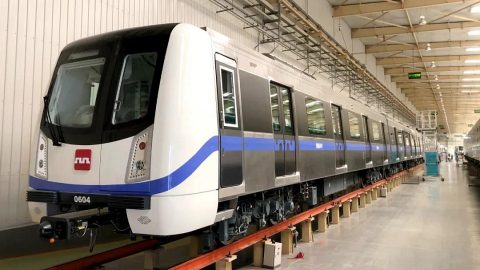 Another CRRC’s success in Europe

No sooner had China Railway Rolling Stock Corporation completed the deal with Vossloh Group than it achieved another success in Europe. CRRC Tangshan, a part of the Chinese manufacturing state-owned holding, has won the procurement process for supplying eight five-carriage metro trainsets to the Ukrainian city of Kharkiv. The delivery must be fulfilled in 35 months.

CRRC Tangshan will produce eight five-carriage metro trainsets for Kharkiv Metro at its facility in Hebei Province. According to the tender documentation, each train will have a length of 96.18 metres, a width of 2.675 metres and height of 3.65 metres, the Xinhua News Agency reported. The vehicles will be able to speed up to 80 kilometres per hour. All the carriages in the trainsets will be connected with the open gangways. This option allows the passengers to freely move from one carriage to another. Currently, Kharkiv Metro has trainsets with partitions between cars.

It is worth to note that CRRC’s win in the procurement could be contested. Another participant, Ukraine-based rolling stock manufacturer Kryukov Railway Car Building Works (KRCBW) has already expressed such an intention. The Ukrainian company claims that the tender committee did not take into account all the aspects.

As the procurement is funded by the European Investment Bank (EIB), there are some specific procedure requirements. For instance, local manufacturers receive a preference of 15 per cent. According to KRCBW, the tender committee neglected this option. Another aspect is import duty and VAT that the city of Kharkiv will pay when the Chinese trains will be delivered to Ukraine.

If the deal between CRRC and Kharkiv Metro is approved, CRRC Tangshan will conclude the second contract in Europe this year. In January the Chinese company signed the 49,6-million-euro agreement with Metro do Porto, the public transport in the second-largest city in Portugal, for delivering 18 light rail vehicles. Each tram will be bi-directional and have a capacity for carrying up to 252 passengers, 64 of them are seated. The vehicles will be supplied to Porto in 2021-2023.