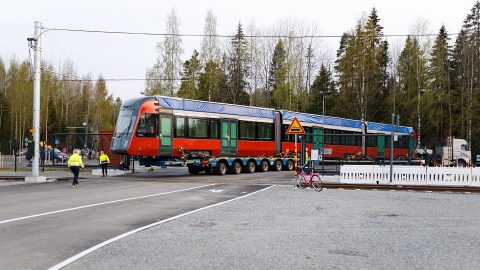 First tram delivered to Tampere for tests and training

The first tram has been delivered to the Finnish city of Tampere. In the coming weeks, it will start the test runs and will help to train the future tram drivers. Tampere plans to launch the city tram network in August 2021.

The last weekend has become a milestone for the Tampere light rail project. On Saturday, 24 May, Finnish haulage company Kuljetus K.Rissanen delivered the first tram to Tampere with the help of a specialised articulated lorry. The light rail vehicle was transported from Otanmäki where the manufacturing facility of Škoda Transtech is located.

Due to the tram dimensions (37.3 metres long, 2.65 metres wide, 3.6 metres high and 56.8 tonnes weight), the delivery for a distance of more than 630 kilometres took almost the entire day. The articulated lorry departed from Otanmäki in Saturday’s early morning and arrived at the Hervanta tram depot in the late evening.

In total, Škoda Transtech, the Finnish subsidiary of Czech manufacturing company Škoda Transportation, is committed to produce 19 trams for the planned network in Tampere. They belong to the ForCity Smart Artic type currently used on the city routes in Helsinki, the capital of Finland. The next vehicle will be delivered to the city in September. Meanwhile, the entire order should be completed by August 2021 when the light rail system will be launched.

Each bi-directional vehicle has three sections and is able to carry up to 264 passengers, 64 of them are seated. All the trams are low-floor, barrier-free and are equipped with special areas for wheelchairs or prams. According to the agreement concluded in 2017, there is an option for ordering an additional 46 vehicles.

In June, the new ForCity Smart Artic tram will start to run on the streets of Tampere within the test and training programme. Finnish railway company VR Group, which will operate the tram network on the behalf of the municipal company Tampere Tramway, has already started the 12-month training courses for future traffic controllers. The first nine traffic controllers have been training since 11 May.

Moreover, VR Group has scheduled to begin the training courses for the tram drivers with the help of simulators and real driving. In general, 65 tram drivers will be hired to operate the light rail vehicles in Tampere.