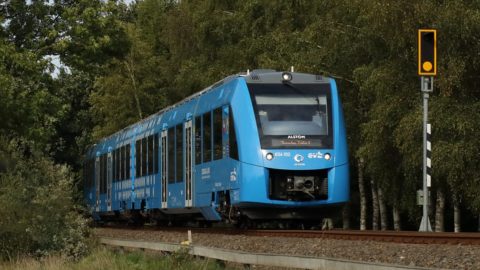 Future of mobility: what is known about hydrogen trains in Germany

For a year and a half, the passengers in Lower Saxony were able to travel the hydrogen-powered trains. Two Alstom-made Coradia iLint vehicles have proved their efficiency for regional routes. Germany as the first country to use these innovative trains plans to start their regular operations in 2022.

The history of the hydrogen-powered trains began for Alstom four years ago. In 2014 the French manufacturer concluded a memorandum with several German states for the development of a new generation of an emission-free vehicle equipped with fuel cell drive. Afterwards, Alstom set several important milestones for this project implemented mainly at its facility in Salzgitter. The first milestone is the rollout and public presentation of the Coradia iLint innovative trains in September 2016 at InnoTrans. The second turning point was the preliminary test drives in Germany and Czechia during 2017.

Another milestone was set two years ago, in September 2018, when two Alstom-made hydrogen-powered trains began their year-and-a-half journey in Lower Saxony. These tests on the regular network completed at the end of February of this year. “Our two pre-series trains of the Coradia iLint have proven over the past year and a half that fuel cell technology can be used successfully in daily passenger service. We have also obtained valuable data from the trial operation of the fuel cell trains for the further development of the propulsion technology,” Managing Director for Germany and Austria of Alstom Transport Deutschland Jörg Nikutta summed the key results of the trials.

From September 2018 to February 2020, two Coradia iLint trains were running on the Buxtehude – Bremerhaven – Cuxhaven line in Lower Saxony. This route is non-electrified and has a length of around 100 kilometres. The innovative trains performed the regular service on behalf of Eisenbahnen und Verkehrsbetriebe Elbe-Weser (EVB), the German operator focused on the mentioned region. For a year and a half, the Coradia iLint travelled a distance of more than 180,000 driven kilometres. “We are proud that we were the first railway company in the world to be allowed to operate the first two fuel cell trains on the Weser-Elbe network. From the very beginning, our passengers were very curious about the trains and their new propulsion technology,” Andreas Wagner from EVB noted.

Each Coradia iLint train has one tank, which contains a significant volume of fuel enough to ride for the distance of up to 1,000 kilometres. This feature makes the hydrogen-powered trains really competitive in contrast to conventional diesel vehicles. However, there is a similar option for both types of rolling stock: they need a special filling station for refuelling.

For the test operations, Alstom provided EVB with a temporary mobile hydrogen filling station. The gaseous hydrogen was pumped into the trains from a 40-foot-high steel container next to the tracks at Bremervörde station. When the Coradia iLint trains will start to run in Lower Saxony regularly, they will be refuelled at a stationary filling station. It will be located near Bremervoerde station (a German town where EVB is based). The motionless filling station will be constructed by engineering company Linde.

“This is a revolution for Alstom and for the future of mobility. The world’s first hydrogen fuel cell train is entering passenger service and is ready for serial production. The Coradia iLint heralds a new era in emission-free rail transport,” CEO of Alstom Henri Poupart-Lafarge stressed at the official ceremony in September 2018. Two years later, these words are still relevant because the French manufacturer has big plans for the hydrogen-powered trains.

Alstom has already secured two deals in the German market for the Coradia iLint vehicles. By the end of 2022, 14 trains of this type will be delivered to EVB. Other 27 vehicles were ordered by Fahrzeugmanagement Region Frankfurt RheinMain (fahma), the railway operator in the Frankfurt Rhine-Main Metropolitan Area. The number of the ordered trains could increase in the coming years as the French company signed letters of intent for 60 trains with the German states of Lower Saxony, North Rhine-Westphalia, Baden-Württemberg and the Hessian transport association Rhein-Main-Verkehrsverbund.