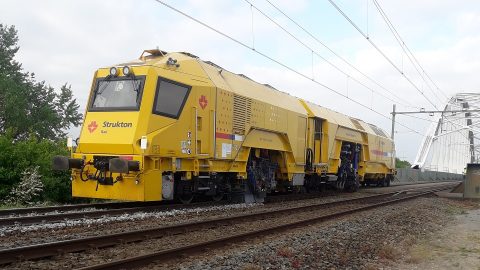 Dutch contractor Strukton Rail has entered service the ground-breaking intelligent tamping machine Universal Tamper 4.0. It is able of learning to work by itself and has several other innovative features. The machine was developed by Austrian manufacturer System7 in response to the needs of the Dutch customer.

“With its investment in Universal Tamper 4.0, Strukton Rail now has next level tamping technology in-house. As such, the company has taken a new step towards a data-driven future,” the Dutch entity stated. The new machine will allow Strukton Rail, one of the largest railway contractors in Europe, to improve its tamping service. It is ground-breaking in several aspects. First, this vehicle is applicable for tamping both straight tracks and turnouts. Second, it is capable to extract high-quality data from the tracks and convert it into predictive information.

In addition, the Universal Tamper 4.0 records the position of the tracks and provides information about the density of the ballast below the sleepers. The machine contains special sensors that measure the force applied by the tamping mechanisms to compress the ballast. It also requires fewer people to drive it. In operating mode, the vehicle produces less noise. According to System7, there is a 7-decibel noise reduction.

Strukton Rail is a subsidiary of Dutch construction company Strukton. It is focused on designing, constructing, renovating and maintaining the light and heavy rail infrastructure, electric train systems and mobility systems. The company counts the Netherlands, Sweden, Denmark, Italy and Belgium among its home countries, offers solutions, including smart maintenance solutions, in Australia and the United States, and operates throughout the world on a project and product basis. In general, Strukton has some 6,500 employees and annual sales of over 1.9 billion euros.