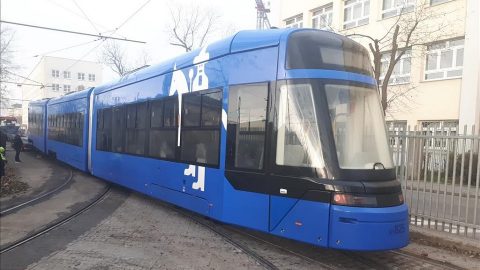 Public transport operator MPK Kraków is testing the first Tango tram from Stadler Rail. It is a new type of low-floor light rail vehicle to be operated in the Polish city. By the end of the year, Stadler Rail is committed to delivering 50 units of this series. This number could be increased due to the recent new contract up to 110 units in the coming years.

On Thursday, 26 March, the second Tango three-section tram was delivered to Kraków. Soon, it will join the first unit of the same type which is being tested since the beginning of the current year. The Tango trams are also nicknamed as Lajkonik after the unofficial symbol of Kraków that represents a bearded man with a hobby horse. This character is pictured on the car body. MPK Kraków will receive 50 units of the Tango type by the end of the year. Each vehicle has a total capacity for carrying up to 225 passengers, 82 of them seated.

The public transport operator in the city of Kraków intends to replace the high-floor trams including the Konstal 105Na vehicles running since the 1970s. That’s why MPK Kraków concluded another deal for 60 Tango trams. The agreement includes the firm order for 10 vehicles and an option for an additional 50 vehicles. The procurement is partially financed from the EU funds, therefore, the final number of the purchased trams will depend on it. If MPK Kraków uses all the options, the entire order will be completed by the end of 2025.

As the trams from the first contract for 50 units, the vehicles from the second batch will be also produced in the same formation (three sections) and at the same locations – at the Polish facilities of Stadler Rail in Środa Wielkopolska (Stadler Środa) and Siedlce (Stadler Polska). However, the new order has one important feature. Two trams must be equipped with batteries for catenary-free operations. The remaining 48 units must have special areas for installing batteries in the future. MPK Kraków plans to use the battery-powered trams for operations on the distances of up to 3 kilometres.