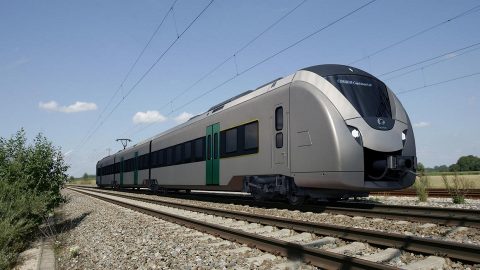 The German railway market is shifting towards the hybrid trains and locomotives. In a few weeks after DB Cargo had purchased 50 hybrid shunters, another German operator embarked on the same path. Verkehrsverbund Mittelsachsen (VMS), the public transport company in Saxony, ordered 11 battery-electric trains from the French manufacturer Alstom. These vehicles will be introduced in 2023.

11 battery-electric multiple units (BEMU) of the Coradia Continental type will serve the 80-kilometre non-electrified line between Leipzig and Chemnitz, two major cities of Saxony. The agreement between Alstom and VMS was signed on Wednesday, 5 February. It is valued at around 100 million euros and, among other things, includes the maintenance services until 2032. Alstom will produce these trains at its German facility in Salzgitter, Lower Saxony. At the same time, the batteries will be designed and manufactured by Alstom’s traction centre of excellence in Tarbes, France.

The BEMU trains ordered by VMS are based on the Coradia Continental conventional vehicles already serving the electrified routes in Saxony (Dresden, Riesa, Zwickau). They will be able to run at a speed of 120 kilometres per hour in both modes, by using the electric wires and battery energy. Each train will have a length of 56 metres, will consist of three carriages and will be able to carry 150 seated passengers. The only difference the ordered BEMU trains will have is the lithium-ion batteries installed on the roof.

The mentioned deal is the first BEMU contract for Alstom but not for the passenger segment of the German railway market. In June 2019 the public transport authority Nahverkehrsverbund Schleswig-Holstein (NAH.SH) ordered 55 Akku battery-powered trains from Stadler Rail. They will be used on the regional non-electrified lines in the state of Schleswig-Holstein.

Meanwhile, the German rail freight sector has also made some progress in this area. At the end of January 2020, the rail freight operator DB Cargo ordered the first bunch of the hybrid, battery-diesel, shunting locomotives. Other 50 units will be rented additionally by the railway company. DB Cargo is regarding the hybrid shunters as an effective tool in reducing its energy and fuel costs. Also, the new locomotives will replace the old rolling stock still operated by the German rail freight company.

Besides the battery-electric trains, the German operators have succeeded in using hydrogen-powered vehicles. In this regards, Alstom has also contributed significantly. In September 2018 Eisenbahnen und Verkehrsbetriebe Elbe-Weser (EVB), the regional rail operator in Lower Saxony, entered service the first Coradia iLint hydrogen train. It was developed and produced by Alstom on the basis of its Coradia train family. EVB plans to add 14 more hydrogen-powered vehicles to its fleet. They will be supplied by Alstom until 2021.

In less than a year after the first hydrogen train has started to run in Germany regularly, another railway company focused on this type of rolling stock. In May 2019 Fahrzeugmanagement Region Frankfurt RheinMain (fahma) booked 27 Coradia iLint trains. From the end of 2022, they will serve the non-electrified lines in the Frankfurt Rhine-Main Metropolitan Area.

Are you interested to know more about the German rail sector? To this end, ProMedia will carry out RailTech Infra Forum 2020. The event will take place in Frankfurt on 16-18 June. Its programme is available on the following link.